Explosives for a bomb raid were found in a garage on Nazarethlaan in Woensel.

The Explosive Ordnance Disposal Service (EOD) detonates the packages in a safe location. Residents of surrounding houses have been asked to remain on the ground floor.

The owner of the garage box discovered the explosives himself. He was supposed to be cleaning out the garage when he saw bags he didn’t know about, which prompted him to call the police.

Part of the street has been cordoned off. Specialists from the EOD were investigating protective bomb suits and will ensure that the packages are detonated elsewhere. 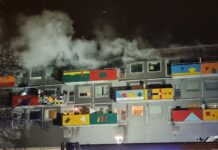