A car was shot last Friday at the Ekkersrijt industrial estate in Son. The police is looking for suspects and witnesses. A man considered as a suspect has been released.

Last Friday afternoon around six, a car was fired by someone from a parked car. This happened in the parking lot in front of the Sanidirect store, opposite to IKEA. Both cars were driven away after the shooting.

According to an eyewitness, two cars were standing in the parking lot and each has a young man. They were talking ‘friendly’ after which one of them pulled a weapon and started firing. At least one shell has been found.

A 23-year-old man from Schiedam was arrested on Friday evening. He is no longer seen as a suspect for the incident and has been released. The other man from Valkenswaard reported to the police as a witness on Saturday. He is not considered as a suspect and was able to go home after questioning.

According to the police, it is still ‘completely unclear’ on the cause of the shooting. It is also not known whether anyone was injured. The police have received camera images and continues looking for more footage. The police also want to get in touch with witnesses. 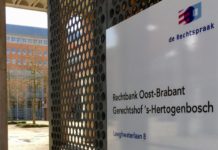