On Friday, the police arrested a 44-year-old man from Geldrop.

He’s suspected of being involved in the death of Els Slurink from Groningen more than two decades ago. The man is only allowed to have contact with his lawyer. That’s why the police aren’t sharing any further information about the ongoing investigation or suspect.

Els Slurink (33) was killed on the night of 20 to 21 March 1997.  That murder occurred in her home on the Van Brakelplein in Groningen. She died as a result of a stab wound to her heart.

The investigative efforts of the past 24 years had not led to this case being solved. It remains unclear what exactly happened in Slurink’s home. Or what led to her being stabbed. The case remains open until the perpetrator is behind bars. 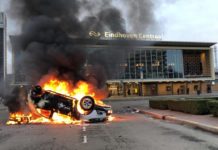