The man who was waving a knife on the Oostendelaan on Thursday afternoon has been overpowered by the police.

The house of the man, who was reportedly wielding a machete, was surrounded by police. Earlier in the afternoon a threatening situation arose when the man walked around with a knife. An arrest team was called in, and negotiators tried to persuade the man to lay down his weapon. According to a police spokesman, the man was so confused that it was not possible to talk to him.

Bean bag
Even when the arrest team entered the house, they first tried to calm the man. When that did not work, the man was overpowered. First, a so-called ‘bean bag’ was used, a bag of beans that is fired from a gun. When that did not help, an electric shock was given with a taser.

Alcohol and drugs
Local residents say that now is the third time that the man has been taken away. He has tried to break into neighbours’ houses more often, knocked in windows and recently stood in front of local residents with a stick. “Every time he is taken away, but he also comes back just as quickly. If he comes back now, I will really work on it,” said a local resident. “He is a good guy in principle, but when he goes to drink and do drugs, he gets voices in his head and he keeps spinning,” says another local resident. Someone added: “He is mentally ill. It is very sad.”

The man is being checked by ambulance staff. It is also examined whether the man still needs help from a care institution. 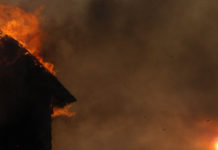