An armed robbery took place in a house on Piet Heinstraat in Waalre.

The incident occurred on Tuesday evening at around 23:00. The home’s occupant was slightly injured. Two masked men, in dark clothes, forced open the house’s front door.

The resident managed to escape with minor injuries. They then alerted the police. “Meanwhile, the robbers had run away, fleeing in an unknown direction,” the police tweeted.

It’s not known whether the perpetrators stole anything. The police are asking witnesses to come forward.

‘Arsonist’ flees in the nick of time 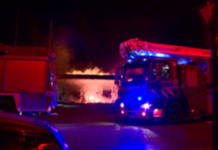 Another fire at recycling company

Yet another car blazes in the city