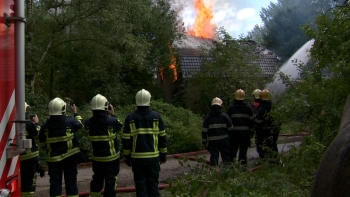 On an industrial estate on Ambachtsweg in Woensel-Noord, a large fire has been raging since 22:15 on Tuesday night.

The Fire Brigade deployed several vehicles (three extinguishers and an aerial work platform) and quickly scaled up the fire to a ‘major fire’. According to the p2000 alarm network, the fire was in the Battery Street battery shop, a building wedged between  Ambachtsweg and Boschdijk and flanked by the Kwik-Fit.

The Fire Brigade has deployed a water container and a crash tender to bring in extra fire fighting water.

Battery Street is a company with several branches. In Eindhoven, the branch is combined with a supplier of forklift trucks.

The Fire Brigade calls on residents to keep their windows and doors closed due to possible harmful concentrations of hazardous substances in the smoke.