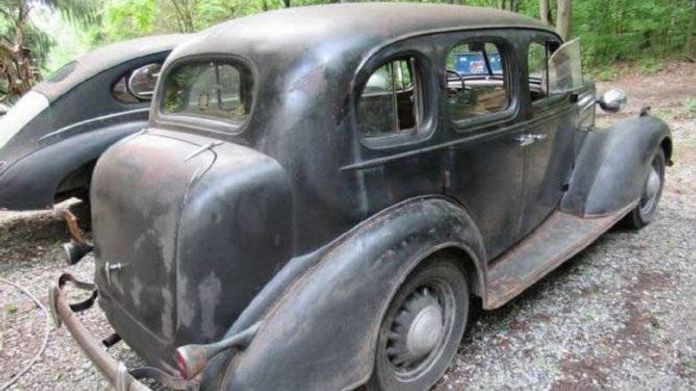 Classic car collector Frans Mandigers from Eindhoven, recently became the proud owner of a very special car. He obtained an American Chevrolet from 1936. This Chevy is a nice addition to his collection of classic cars.

Mandigers became passionate about large American cars at an early age. “As a child, I often visited my family. They always lost sight of me,” says Mandigers laughingly. “I was admiring my uncle’s 1958 Chevrolet.”

For a large part of his life, Mandigers worked in advertising. After the recession, he decided to combine his two great passions: painting and old cars.

“I inherited these passions from my grandfathers”, states Mandigers. “One grandfather was a painter and the other was a car mechanic.”

Mandigers now has his own company, where he and a few friends change cars into “ugly”, as he himself puts it. “We make them look older than they are, by painting them in a special way.”

So when Mandigers learned an American classic car enthusiast from Philadelphia owned an old Chevrolet from 1936, he wanted it. The year has a special meaning for him: “1936 is also the year in which my grandfather died.”

Mandigers is the car’s proud owner since the 2nd of January. “It’s always exciting to see the condition of the car for the first time, especially after such a long journey from America”.

His latest acquisition does not need much work. “The man I bought it from, had already made the car technically sound. We are now going to make the car look even ‘older’, by painting it.”

Another special feature this car will obtain: the watch of Mandigers’ deceased grandfather. It will get a special place in this special classic car.

Mandigers plans to make several tours with his latest acquisition. “But in the end, it’s more about having the car and working on it with my friends,” he mentions.

Housing shortage to be addressed

CKE worried about influx after the summer

One million overnight hotel stays in 2019