Home NEWS PSV on the eve of a gigantic lead

PSV has found several keys to scoring goals and are now five points ahead of number 2, Ajax Amsterdam. With the classic Feyenoord – Ajax on the menu, coming Sunday, PSV are surely going to leave one of their two main rivals 2 or 3 points further behind.

Black-and-white squad from the East
Coming Sunday PSV are playing against Heracles, from the East side of our small country. The current number 13 have been a steady Eredivisie-club only since 2005, when Peter Bosz (currently Borussia Dortmund) coached the team from the Jupiler League to the highest division of the Netherlands. The statistics are obviously in favor of PSV: 73,7% of the home matches were won, the last time Heracles beat PSV in Eindhoven during a competition match was in the season of 1964/65. However, last season, the black-and-white squad took a point home to Almelo, and every match simply is a match on itself. Nothing new to say on that matter.

Heracles are waiting for a serious comeback of the one man that brings that special flavor to the squad: Brandley Kuwas. When he’s fit, it’s gonna be interesting to see if Isi has learned from training with tennis balls.

Isimat forced to train with…tennis balls?
Indeed, central defender Nicolas Isimat-Mirin has trained with tennis balls, this week. Head coach Phillip Cocu has had it with ‘Isi’ plucking and pulling opponent’s jerseys, which already caused 3 penalties and unnecessary goals for the wrong party. Cocu has used a renown method of learning defenders to not use their hands, making them hold a tennis ball in each hand during serious training sessions. This should help them kick the habit and learn new ways to defend strikers without causing danger for the rest of the team. 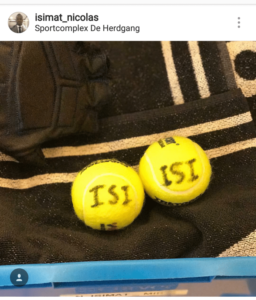 It’s not the first time the Frenchman has gotten warnings on his defensive skills, and it seems it’s really a final warning before he will be put on the bench for the rest of the season. Isimat has made a name to be a funny guy from his first season on, but supporters seem to be on Cocu’s side now and want him to be a clown only off the pitch instead of in the penalty box from now on.

Chucky back on the pitch
Hirving Lozano has made his appearance back on the pitch again, after coming home from an international match with Mexico injured on his elbow. Apparently it was too serious to let him play against VVV, last week in Venlo, now everybody in Eindhoven is eager to see him swirl over the Philips Stadium grass again. This guy has impressed everyone from his first match, scoring goals, giving assists and creating huge danger in the opponent’s penalty box, helping PSV into lead position and personally igniting a hype from here to across the pond. If PSV hadn’t made fans in Mexico during Maza and Salcido’s time, it was during Guardado and Moreno’s years in Eindhoven. Those who were still sleeping now followed in the last few months, because ‘Chucky’ is the new Golden Boy proving the sky is the limit for Mexican talents in Europe.

Pereiro on a stroll
Gastón Pereiro seems to be totally in his element since he took over the number 10 position from Davy Pröpper, who transferred to Brighton & Hove Albion in the English Premier League. More than when he had a position as a winger, he creates chances and scores goals, 5 out of 8 matches already. Only Locadia and Lozano have scored 1 more, Van Ginkel follows with 4 and Bergwijn with 2 goals. You can also see this as a strong point of the current PSV selection: the goals come from different players.

This is also the way coach Cocu seems to be operating more and more: adapt to the opponent when necessary, put the players you need on the spots where you want to use them, or even leave them on the bench if you need a specific style of player to break open the defensive wall. This is something noteworthy because it has always been a sort of a ‘sin’ to do so in the Netherlands: the law has been for ages that you play in a 4-4-3 system and count on your own strength, not adapting to any opponent. If you look at Cocu’s approach, you can see it brought PSV succes in Europe. Seeing it from that perspective, let’s just believe this season’s absence from European football is simply an incident.

All eyes on the national cup and ofcourse the national championship. With Feyenoord and Ajax playing against one another right after PSV finishes, this Sunday, that goal can come a bit closer early in the season already. If they draw and PSV wins, the advantage will be 7 points after 9 matches played. Enough to look forward to in Eindhoven!