Driving or cycling in a simulator, with VR glasses on. This is how Geldrop schoolchildren are made aware of the dangers of texting and scrolling in traffic. This is done in memory of 21-year-old fellow villager Yannick, who died in 2016 because a driver was looking at their phone screen.

The Yannick Foundation organised Mobile without Mobile on Monday to confront children with unnecessary traffic deaths and the dangers of using the telephone in traffic. It was founded by the parents of Yannick Frijns, after her tragic death.

For six years, the foundation worked to raise awareness about the use of the smartphone. “So many lives can change dramatically in a few seconds,” says Frank Freijs, Yannick’s father.

In addition to the lessons, a monument was also unveiled on Monday afternoon, at Geldrop Castle. The memorial is there in memory of Yannick. Besides her parents, mayor Jos van Bree and traffic minister Mark Harbers were among the attendees.

Between 20 and 30 per cent of all traffic accidents in the Netherlands are caused by distraction.

Translated and edited by: Shanthi Ramani 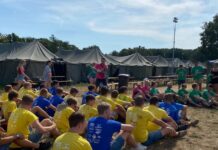