With a harvest cart, boat, train, bus or by foot: nothing is too crazy for 60-year-old Eindhoven native Hans Verdonschot. He started to travel on Tuesday from  Eindhoven to India by anything but plane. In three weeks he hopes to arrive in Kolkata/Calcutta after a journey of 11,000 kilometres and 9 land borders.

With this initiative Hans wants to raise money for Calcutta Rescue, an organisation that supports projects for health care, education and employment for the poorest people in and around Kolkata. Hans has been cooperating with the organisation for years. “They do fantastic work, which I have been greatly touched by”, he says.

A nice challenge, the Eindhoven native calls his trip. But it does require the necessary preparations. For example, he has been applying for visas since November 2022. “That was a huge problem, because most countries don’t want you to cross the border over land. They don’t trust that. It worked out now, but I really had to put a lot of effort into it”.

The trip will include Turkey, Iran and Pakistan. Iran in particular will be a challenge for Hans because of the unstable safety situation. “It may sound really stupid, but I’m really going to try to go through Iran”, he says determinedly. “I know that travelling up to capital Tehran is not a problem now. How I proceed from there, I still have to figure out”. 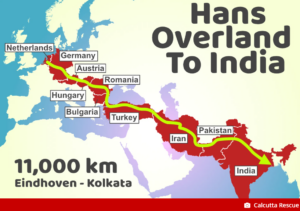 The route Hans will take to Kolkata

The man from Eindhoven is not doing all this effort just for fun. He is a climate activist and thus wants to set a good example for others. “Flying is so terribly polluting, so I want to show, that it can also be done this way, and that travelling by land is something very beautiful. You meet people and meanwhile see the environment slowly change. I love that”.

With his trip, Hans wants to raise €11,000. That will be used for healthcare, but also to help people in Kolkata become more sustainable. “Sustainability is something different there than here in the Netherlands. You can’t put solar panels on the roofs in Kolkata. But they still cook on fire for example. So you can look at how you can organise a cooking spot sustainably.”

Once the traveller arrives in India, he will stay for sixty days. “I’m a nurse myself and I’m going to see if I can volunteer in healthcare there. That should work out”. In addition, Hans is in touch with some classes at an elementary school in Kolkata. “They follow me online and I will end up going to them, telling them what it was like and explaining how to travel sustainably in a simple way”.

And when he’s done there? Then, of course, Hans doesn’t catch a plane back home. “I want to return the same way: by land. I don’t have the visas for that yet, so I hope it all works out”.

Curious about Hans’ journey? From 3 January, you can follow him via Polar Steps.
And here you can make a donation. 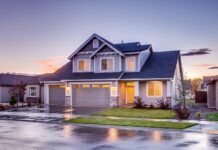 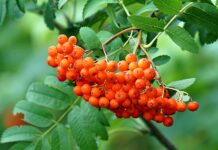 Southeast Brabant to receive 40,000 trees in the new year

Climate activists back at the TU/e