Residents of Eindhoven and the surrounding area can now go to the GGD for a corona vaccination without an appointment. The healthcare institution is also opening pop-up locations in the region where people can get an injection.

The free walk-in of the vaccination locations in Eindhoven and Helmond is open from 9:00 am to 4:30 pm. This applies to both the ‘basic series’ and the repeat injection.

Anyone aged 12 and older who had a corona shot or infection more than three months ago can walk in, the GGD reports. Incidentally, a face mask is mandatory for those who want to get a shot.

The pop-up locations are opened after those locations also reaped previous success, the GGD reports. The locations will be opened in Veldhoven, Bladel and Someren.

“We have done this before, and it has always been well received. A small location closer to home appears to remove a threshold for residents, especially for people over 60 and residents who cannot come to the large vaccination location because they are less mobile. We think it is important to give everyone who wants access to the repeat shot as easily as possible,” says Joop De Graaff, Project Manager COVID-19 at the GGD. 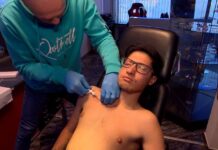