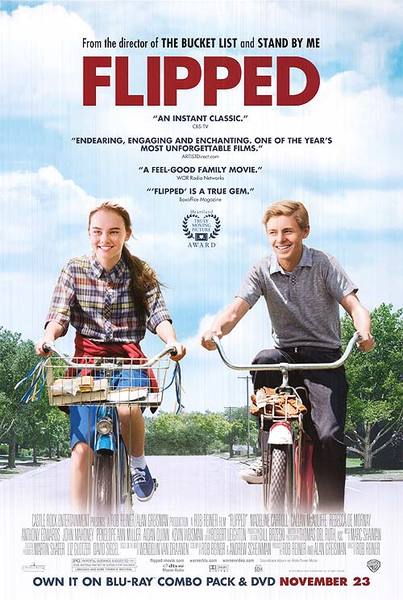 Wendelin van Draanen wrote a beautiful book and Rob Reiner bought the rights. He wrote the screenplay with Andrew Scheinman and he directed the movie.

Flipped is a romantic comedy, telling the story of a teen, neighbours and a tree.
I love family oriented movies like this, no blood, guns or aliens. Just a street, families and their interactions (or the lack thereof).

Flipped tells the story about a girl who has a crush on a boy. All through grade school into high school Juli Baker played by Madeline Carroll pursues Bryce Loski played by Callan McAuliffe.
But in eighth grade Juli turns her attention to more important matters like the sycamore tree in her front yard.

The city counsel wants to chop down the tree. Juli climbs into the tree and refuses to come down.

Her parents, very gifted actors Penelope Ann Miller and Aidan Quinn, take care of their child like parents do.

What’s a teenage boy supposed to do when a teenage girl tells him his hair smells like watermelon or wants him to sit in a tree for the spectacular view? There’s just no telling what Juli will do next, and Bryce is one guy who’d rather be safe than sorry. Though disappointed by Bryce’s unwillingness to see things her way, or even to see the things in life she finds most meaningful, Juli continues to give her potential romeo the benefit of the doubt. Until those doubts stack up so high that she finally thinks maybe she was wrong about him. It’s just about the same time Bryce starts to think maybe he was wrong about her, too. But is he too late? Flipped!

Rent this movie, you and your family will enjoy it!