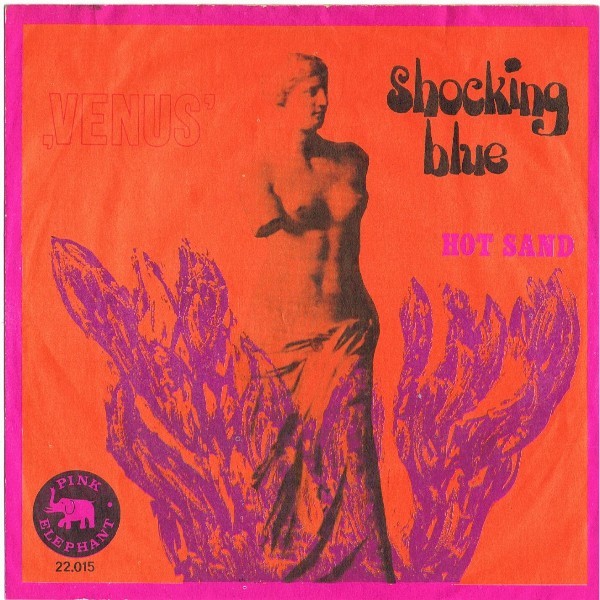 Although Shocking Blue had two Dutch number 1 hits, Mighty Joe and Never Marry A Railroad Man, the song Venus is still regarded as their ultimate hit.

And rightly so, wth Venus, the band from The Hague topped the American charts, a rare feat for any Dutch act, while it didn’t even reach the top position on the Dutch charts. In two consecutive years – in 1969 and in 1970 – it stalled at the 3rd place in the charts.

Proud as the Netherlands may be of this historic feat, to be honest, Venus wasn’t composer and guitarist Robbie van Leeuwen’s most creative song. It can best be described by the Dutch saying ‘beter goed gejat, dan slecht bedacht,’ which means ‘it’s better to steal something good than to think of something new for yourself that’s bad.’ Venus consists of the intro of The Who’s Pinball Wizard, the melody is very similar to The Banjo Song, a folksong of the American group The Big Three, and the guitar solo is reminiscent of Get Back by a little known band called The Beatles.
But it wasn’t just Van Leeuwen’s song writing that was the key to the success of Shocking Blue. Singer Mariska Veres – already well known in the band’s hometown The Hague because she had fronted several rock bands – was regarded as something of a vamp with a low, husky voice (though Veres was very shy and prudent and didn’t like the sexy image at all).

After the success of Venus the band tried to score a second worldwide hit, but to no avail. Guitarist and main songwriter Van Leeuwen left Shocking Blue in 1973 and formed the folk-rock band Galaxy-Lin. It had moderate success in the Netherlands. Later in the seventies he was re-united with singer Mariska Veres in the studio project Mistral. Veres also had some moderate success as a solo artist, but she remained primarily famous as the female lead singer of Shocking Blue. She died in 2006.

Nowadays Shocking Blue is regarded as something of a cult act. When The Raconteurs played the Lowlands festival in 2005 they opened their set with a cover of Send Me A Postcard and the very first single grunge band Nirvana recorded was a cover of the song Love Buzz (it can be found on their debut LP Bleach). When Van Leeuwen heard Nirvana’s version, however, he wasn’t impressed at all.