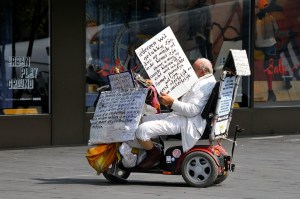 I remember vividly when I first saw him. Right in the middle of the walking path, an old guy sitting in a wheelchair and shouting out loud.

‘He is the preacher’

“What does he preach about?”

“You’ve got to be kidding me! We live in a country, where every day another church is turned into a night club. We have science now, we don’t need God.”

One weekend I saw him talking to a group of youngsters. He was answering their questions patiently.

Another time under heavy rain, I saw someone holding an umbrella for him.

Some were paying attention, some were just walking by….he was always there, preaching. Determined and dedicated.

He didn’t have a website, he didn’t have youtube videos, there was no screen where we could watch him, he was not playing a recording. He was shouting out loud with his own voice, his messages were handwritten on card boards and he was there in person. You could touch him, query him, greet him and ask him how he was.

He was the black and white photo taken at your parents’ wedding day. He was the coffee grinder hanging on the kitchen wall. He was the radio in the living room decorated by lacework. He was the encyclopedias being used for homework assignments. He was the handwritten letters received from relatives long ago.

He was so familiar, at the same time so far away….

His loss reminds us to slow down and pay attention to what made us.

26 November 2021
Eindhoven is taking measures to control the crowds on the Black Friday. Shops will open earlier. More police is deployed in the city centre.  With the...

Cold, bleak weather on the way, chance of snow

Rat successfully combated in Blixembosch; now the rest of the city

Politicians hesitate over ‘Vonk’: ‘Concerns about nature and parking nuisance’