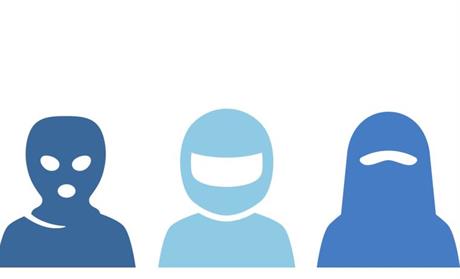 What does the government say on this law?
In the Netherlands, you have the right to dress the way you want, no matter what others think. But in certain situations, people need to be able to see each other and recognise each other. The Dutch government therefore prohibits clothing that completely covers the face at certain locations: in public transport, education, health care and in government buildings.

This is regulated by the “Wet ‘Gedeeltelijk verbod gezichtsbedekkende kleding”, partial ban on face covering clothing’ Act – popularly known as the burqa ban or the niqab ban. The Lower House of Parliament approved the bill in the autumn of 2016. The Senate also approved the bill on 26 June 2018. After consultation with the relevant sectors, the date of entry into force was set at 1 August 2019.

From 1 August 2019, a ban on the wearing of face covering clothing in educational and care institutions will apply. And also in public transport and in government buildings. For example, an integral helmet, a balaclava or a niqab. However, there are a few exceptions. You may cover your face if necessary for work or for sports or events. Think of a party. The prohibition also does not apply in some parts of healthcare institutions.

Penalty in case of violation
Are you wearing facial clothing in a location where this is forbidden? If so, a site employee may ask you to remove the face cover or leave the site. If you don’t do this, the police can be called in and you risk a fine. 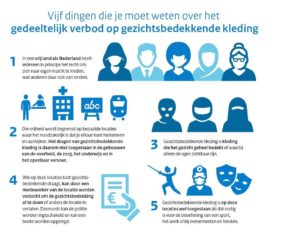 It is said that the ban on wearing face-covering garments will be evaluated after three years.  The ban, 13 years in the making, has many unanswered questions about how it will work in practice. In particular, questions have been asked about the apparent refusal of public transport companies to take action against burqa and niqab wearers, and similar statements have been made by hospital chiefs.

Critics warn it could dissuade some women from entering public spaces, including schools. They say it is completely disproportionate and the only effect will be that many of these women will stay at home even more,

The law follows similar bans in France, Germany, Belgium and Switzerland but the Dutch law is described by the government as “religion-neutral,” and does not go as far as more extensive bans in neighbouring countries.
Your advertisement here.

30 June 2022
On Thursday evening, 2000 MBO students from Summa College show their skills during the Crafted Festival in the Klokgebouw on Strijp-S Crafted is the festival...