Home FEATURES How Did I become a PSV Fan? 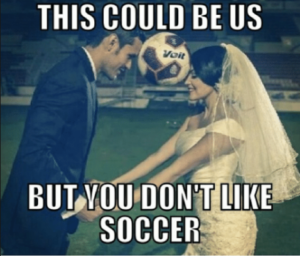 If somebody asked, I would have described myself with many things. And one of them would have been “Not a soccer fan!”.

I used to associate the concept of soccer with being in a male social field, which predominantly attracts the non-intelligent part of their brain. A sign of hegemonic masculinity and a label for stereotype vandalism.

Soccer matches are always on the weekends. But this is the only fully free days of the week. Why would I spend hours to watch a bunch of men chasing a ball? During the soccer matches bars are fully packed, nobody talks to each other, everyone is magnetically fixated on the screen, like there is nothing else moving in the world.

Many men like soccer, luckily my husband was not one of them. This was one of the traits of him that I really appreciated. He was simply not a “soccer man”. Until…..

He comes home and says that he has a big surprise for me. I get very excited. Is it a trip somewhere exotic? Or a nice gift? There are a few more things that I would consider as a big surprise, but certainly not seasonal tickets for PSV!

I don’t know what is more disappointing, that my husband absolutely has zero clues about what would make me happy or his new point of view about spending time together, or that he all of a sudden becomes a soccer fan!

“Where does that come from? Honey, remember we don’t like soccer”

Apparently, at work, he got involved with a group of colleagues, who are big-time Ajax supporters. Just to annoy them he started to follow PSV and realized that he actually enjoys soccer.

“Did you really pay money for that?”

It is Saturday and we are ready to go to the first match. It is freezing cold, I covered myself with a huge blanket with stripes and everybody looks at what the heck I wrapped myself around.

“What am I doing here, instead of reading a book in front of the fireplace?”

Two big buses arrive at the other side of the street carrying supporters of the opponent team. They quickly leave the bus and enter a tunnel that is connected to the stadium.

“Why do they use this tunnel? Maybe there is a welcome launch for the guests. I wouldn’t mind a glass of wine either.”

My husband and some others around us laugh out loud. Evidently, the tunnel is for protection and to avoid possible fights.

“It is getting just better and better. I am surrounded by men, who are capable of fighting over a soccer match”.

Then the game starts. Teams are in the field now. 22 young people are ready to demonstrate their talents in front of 35.000 people. The first thought comes to my mind is nervousness. I get nervous at work even when I need to present in front of 10 people. What I witness here is a real exhibition. Wow! I don’t need to like the game, but I definitely feel respect for the players.

As time passes I am more amazed by the dance going on in the field. This is totally different than what I have seen on a TV screen. This is a craftsmanship tango performed in harmony. Well calculated intelligent moves, marvellous movements of the legs remind me of an act of illusion.

I just get off my seat and burst a lusty but a humble scream after the first goal.

It has been almost two years now. I am fully equipped with a PSV shirt, PSV scarf and PSV flag. I am a trendy woman, I like to jazz up. If I go to a soccer match, I need to be dressed up. And I immensely enjoy the ingenuity of the exhibited art.

Dream debut for Van Nistelrooij and Til: “This match was just...

1 August 2022
Eight goals, eight yellow cards, one red card, VAR-moments and some kerfuffles. “Too much to mention it all”, says new coach Ruud van Nistelrooij...