In a few weeks, everything has changed for PSV. From a fear of self inflicted high pressure during the final sprint to a modus of ‘We are not using the word, but everybody knows we are going to be National Champions again’ at the press conferences: Eindhoven is counting down the eight last matches until the celebration of title number 24.

A couple of weeks ago, fear became reality when Lozano was sent off with a red card against Heerenveen and soon after PSV conceded 2 goals and kept only 1 of the 3 points in their own Philips Stadium. The day after, Ajax took all three points back home from Zwolle and shrunk PSV’s lead back from 7 to 5 points; the pressure was back on in Eindhoven.

The week after, Ajax got the chance to get even closer. The Amsterdammers were playing a home match against ADO Den Haag, while PSV were playing a difficult away game against Feyenoord in Rotterdam, where they lost more than they won, over the last years. But Ajax messed up: they forgot to score goals and drew against ADO. PSV started furiously and grabbed Feyenoord by the throat, resulting in a 0-2 lead after 34 minutes. PSV beat the reigning champions with 1-3 and brought the lead on Ajax back to 7 points.

Still shaky from what happened two weeks ago, PSV’s supporters hoped for another good home result against FC Utrecht. It didn’t look like that would happen at first, considering the amount of chances Utrecht created in the first 15 minutes of the game. Other than that, it turned out to be another typical match for PSV: letting their opponent have the ball, but using own sharpness, speed and being deadly effective in front of the opponent’s goal. In 22 minutes the lead was set to 2-0, and after the 3-0 in the 51st minute, not much extra energy was needed to keep a clean sheet as well.

The day after, Ajax had a complete off day in Arnhem. Maybe the team wasn’t able to mentally recover from the damage done in the weeks before. Maybe it was the idea that they had to win in order to bring the difference back to 7 points again. Maybe it was the pressure from outside, as it is always noisy around the team from Amsterdam. Whatever the reason it didn’t matter for Vitesse. They beat the number 2 with 3-2 and thereby helped PSV maintain a lead of no less than 10 points. Ajax now feel the hot breath of AZ in their necks: the red-whites from Alkmaar have now only 2 points less. What a difference a couple of weeks can make… 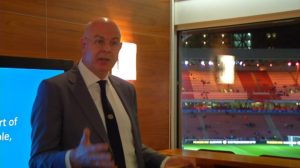 Even with a 10 point lead, no one at De Herdgang was talking about the national title, except PSV’s supporters. Managing Director Toon Gerbrands was quite irritated that the local authorities openly discussed working hours for coworkers of cleaning companies after the celebration of the Eredivisie championship of PSV in Eindhoven. He says:

“Nobody spoke to anyone of us about this, so we don’t understand why announcements on this matter are being released… There are eight more matches to go and there is not a single idea amongst us that we are ‘there’ yet. On the contrary. It wouldn’t be realistic and inappropriate towards opponents to start writing down a title with a pencil… We are professionals and will definitely start preparations for a possible party when neccessary…”

The trainings took place as normal. Kenneth Paal could finally train with the group again, while Maxi Romero was still training separately. It’s quite amazing to see that almost every single player of the current selection is 100 percent fit to play. Why doesn’t anybody praise the staff and their doctors and physiotherapists for that?

Guus Hiddink and Guan Carlos Osorio also watched one of the training sessions. Osorio, current head coach of the Mexican national team, expressed how impressed he is with Lozano’s development. Commenting on Lozano’s suspension, he said Chucky’s temperament is a strength that he needs to learn to control a bit more. Not an unwise thing to say.

Jeroen Zoet, Luuk De Jong and Steven Bergwijn have been preselected for the Dutch national team. Oranje will play two friendly matches in March: the 23rd at the Amsterdam ArenA against England, the 26th in Genéve, against Portugal. It’s the first preselection ever for PSV’s golden boy Bergwijn, who left quite an impression on the pitch in the last several months. Before that, he was a regular basic player for the Dutch Under 21. Captain Marco van Ginkel decided to stay home and focus on PSV and winning the title first, before considering ballasting his knee again. 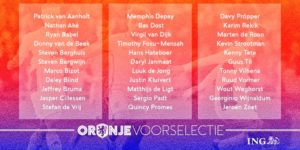 Bart Ramselaar, Sam Lammers, Yanick van Osch and Pablo Rosario are part of the preselection of the Dutch national Under 21 selection. Cody Gakpo, Donyell Malen and Armando Obispo were preselected for the Dutch national Under 19 selection, alongside 5 other players from the PSV Youth Academy. That brings the total of PSV players in the preselections to no less than 15. If you count former PSV players as well, the total becomes 23. But let’s get back to PSV and the upcoming match in the Eredivisie.

Saturday’s opponent is Willem II from Tilburg, a club in crisis. The current number 15 have only 5 points more than the clubs in the danger zone and 6 than the bottom one. Supporters were tired of head coach Erwin van de Looij and expressed their emotions in very clear statements: they didn’t recognise their club anymore, the style of play and intension of the players, van de Looij was just another passer-by destroying the club, he didn’t even talk to disappointed supporters and wanted him to leave ASAP.

Even though the club management reacted by condemning the supporters accusations as ‘inhumane, inappropriate and not in the spirit of Willem II’, van de Looij gave what the supporters wanted and threw in the towel after having had ‘incisive conversations’ with his ‘inner circle’. He says: “Supporters put too much energy in Edwin van de Looi instead of supporting the squad. This definitely doesn’t help the team in the coming definitive fase of the season. That’s why I made this difficult and to me personally very disappointing decision”.

The last time Willem II beat PSV was on 28 March of 2004: PSV were sent home with 3-1. The last 2 seasons, Willem II kept a point in Tilburg. PSV booked their biggest away victory in Tilburg on 4 October of 1987: they scored 6 goals and conceded 0. This all happened around the best period of PSV in history, but Cocu recently took over the record of most won home matches in a row from Guus Hiddink, who was PSV’s coach at that time.

PSV are in good shape, Willem II are not. Willem II absolutely need to win to avoid degradation. The question whether the absence of van de Looij brings a positive shock effect remains to be seen. You could expect a team that wants to score, which is something PSV can deal with perfectly. Hirving Lozano and Jorrit Hendrix are suspended, but apart of these two, Phillip Cocu has availability over a complete fit selection. He probably needs most of his energy in keeping his players sharp and motivated to bring in the title soon and not make the final sprint more exciting than necessary. 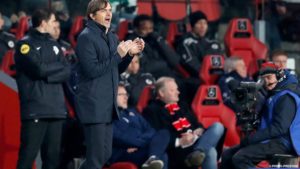 PSV can even win their 24th title if they only just wins their home matches from now on. In the last twenty seasons, PSV gave away more than 9 points only 6 times. The maximum was 12 points in the seasons of 1999, 2007 and 2011. Only a miracle could help Ajax to finish first: they’ll have to win all remaining 8 matches, including the one in Eindhoven on April 15th, and PSV has to lose a lot more than is likely to happen.

Even the most pessimistic statistics point to another championship in Eindhoven.