The extremes of Kamping Kitsch:
If you don’t like bare breasts and uncensored nakedness, this event is definitely not for you. Because yes, festival ‘Kamping Kitsch Club’ in Eindhoven is really the most vulgar fancy dress party of Brabant (and beyond). And it seemed just like carnival: if you wear a crazy outfit, the partying will be fine.

An impression of Kamping Kitsch Club:
Anyone who did not come to this party dressed up was not included. Er, dressed down… The dress code? Not too much fabric. Think of all revealing tiger prints, netting, the women in tiny bikinis and the men in thongs.
They all paraded around happily. No one was surprised. Here, anything went. But it was also “camp site”, with white socks in sandals, a lot of gold, oversized tracksuits and tight leggings.

Warre and his friends from Belgium.
There were remarkably many Belgians at the festival, including Warre (21) and his friends from Kortrijk. It was the first time for them at Kamping Kitsch. What makes it such a party? “Just love”, he said and formed a heart with his hands and danced on to the music of K3 in the ‘Panties & Slip Ups’ tent. 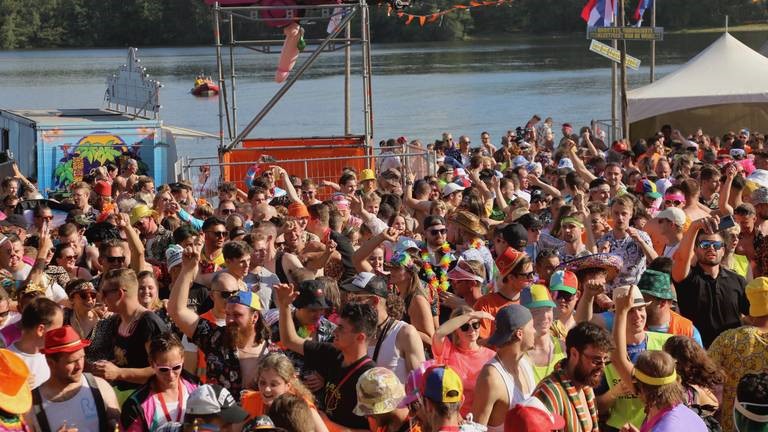 This festival, which is unusual to say the least, has its origins in Belgium. Belgian Roel Beerens has been working for the Dutch branch of organiser Par-T for fourteen years, and a few years ago he pointed out this concept to his colleagues. Isn’t this something for the Dutch?
Where it once started small, this weekend it attracted about 6,300 visitors, he said. There is room for 7,500 guests at Landsard area in Eindhoven.

It was sometimes a bit of a shock, because everywhere you walked, you were hit with intimite body parts. Inflatable ones that is. At the main stage, the organisation made sure that everyone could get one of those inflatables, they threw them right into the audience.

If you like a lot of nudity, this is the party of a lifetime. But what else makes the party fun? “Loosening up, partying and giving it a go”, is what Omroep Brabant’s reporter often heard. Erik from Nuenen also had an explanation: “It is nice and simple. They play music from twenty years ago, very wrong but I like it.” He enjoyed it. During the week, it is all about work and children, this is something different. “And during the week I don’t wear a condom on my head,” he said, laughing.

As the hours went by, the beer flowed richly and the sun went down, some of the visitors dropped out. They took a nap on the grounds while hanging onto their friends. Or they slept on the water’s edge (where, for safety’s sake, there was also a boat with supervisors).

Everything comes to an end eventually, including parties like this one.
Some visitors spent the night somewhere in a hotel, or they were from the neighbourhood and came by bike. Others were looking for a taxi or had pitched their tent on a nearby campsite.
And that’s how it should have been, because if you’re going to a camping party, you’d better camp out there as well. No pictures were taken there, that’s better for everyone.