The former Mariënhage monastery complex in Eindhoven has been redeveloped into DomusDela.

This redesign has received an award. The Van Abbestichting heritage association awarded it a medal of honour. Every two years, the foundation presents a medal.

This goes to those who have made an effort to preserve the city’s cultural heritage. This time it was the organisations that made the monastery redevelopment possible’s turn. These are the Dela funeral company and the architectural firm, DiederenDirrix.

The premises used to consist of an Augustinian monastery, the Paterskerk, and the former Augustinianum. After a complete overall, the renovated area renamed DomusDela, was opened last year.

It now houses a hotel, a conference centre and a brasserie. The old church still serves a function. Weddings and funeral are held there.

The Van Abbestichting writes, “The redevelopment of the entire DomusDela complex testifies to a great deal of respect for the building’s meaning and the place in the Eindhoven community. Many of the buildings’ original functions remain visible.

“A broad range of new functions has also been created. That was done through well-chosen architectural interventions. It’s an exciting, balanced combination of restoration, new construction, and renovation.”

“The realisation of DomusDela has given the complex a new, sustainable, future-proof place in the Eindhoven community. It enriches the city,’ the association writes. 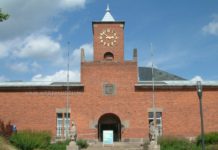 Tunnel to be lit with art