Everyone knows Eindhoven and the surrounding areas have a significant housing shortage. To help alleviate the problem, there are plans to build 5,000 homes in the region over the next three years.

Of these, 800 will be made available for people who aren’t yet on the council’s housing waiting list. The 5,000 homes will be spread across six building projects in four communities. In Eindhoven, these will be on Kennedylaan near Eindhoven Station, where about 825 homes will be built.

In the Emmasingel quarter, between the Witte Dame and the PSV stadium, around 900 houses will go up. There will be roughly 700 temporary housing units on Castiliëlaan in Woensel-Noord. Building will also commence in the centres of Helmond (approx. 900) and Geldrop (approx. 800). And in Best, about 880 units will be built in Aarlesche Erven.

Of these projects, at least half will concern affordable housing. These projects are made possible, in part, thanks to the Dutch central government’s recent ‘housing impetus’. It made €1 billion available. “This will help people who are on the waiting list for affordable housing,” Eindhoven Councillor, Yasin Torunoglu, told Remco van der Weel, an Eindhoven News reporter.

“This governmental funding will help accelerate the realization of these 5,000 houses. Of them, 800 of them will be made available for people who aren’t on a waiting list yet.” Eindhoven News readers will appreciate this since this is a real issue for newly arrived internationals. The first phase of the plan to create more housing was announced, yesterday, by the Stedelijk Gebied Eindhoven (SGE) – the Eindhoven Urban Area.

The SGE consists of the nine municipalities in and around, including, Eindhoven. Over the past few months, these nine municipalities worked together with the Province of Noord Brabant on the development and regional coordination of potentially eligible projects. That resulted in a regional housing deal, the ‘Bid Book’.

The six building projects are all part of this ‘Bid Book’. This ‘Bid Book’ says, “The SGE’s been working together for years on drawing up joint housing policy and coordinating housing plans. Our housing market is strongly regionally interwoven. We, therefore, act based on the knowledge that housing plans in one municipality also affect neighbouring municipalities and the region as a whole. That’s why we see speeding up housing construction as a joint task.”

More than a year ago, in March 2019, Eindhoven Cllr Torunoglu signed a housing deal with The Dutch Minister of Home Affairs, Kasja Ollongren. He did so on the SGE’s behalf. This housing deal has been concluded between the municipalities in the Stedelijk Gebied Eindhoven (SGE), the Department of Home Affairs, and the province of Noord-Brabant.

“With the signing of this deal, parties committed themselves for the long-term. They want to tackle the housing challenge in this region,” reads the ‘bid book’. There are plans to build 27,000 new homes over the next five years, plus some 1,000 temporary dwellings.

The Kennedylaan and Emmasingle Quater are both located in the so-called spoorzone (railway zone) The housing deal states, “Eindhoven is working on the transformation of various inner-city locations. These include the railway zone, including Knoop XL, Strijp S and Strijp T. Thes areas are integral for the improvement and preservation of Eindhoven’s business climate in Eindhoven and the SGE’s urbanisation task.”

Eindhoven City Council and big business have developed a high-quality plan for the realisation of between 650 and 700 modular homes in this area. These are for the low-middle-cost rental segment. The plan focuses on quality of living, cohabitation, greenery and natural spaces. To make this feasible, it has been agreed that this may be extended up to a maximum of 30 years.

The Kennedylaan and Castiliëlaan projects have yet to be submitted to the council for a decision. However, there is a limited time frame for submitting the housing incentive. So, the Municipal Executive has conditionally approved the application.

Land had already been developed for the Emmasingel quarter project. The subsidy application has, merely, sped up the completion of this housing program. The time window for submitting the housing incentive is limited.

There are still several open questions in these applications. These are currently being fleshed out. Should this result in a conflict with the subsidy conditions, the Municipal Executive could withdraw parts of, or the entire, application. 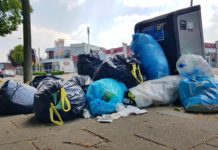