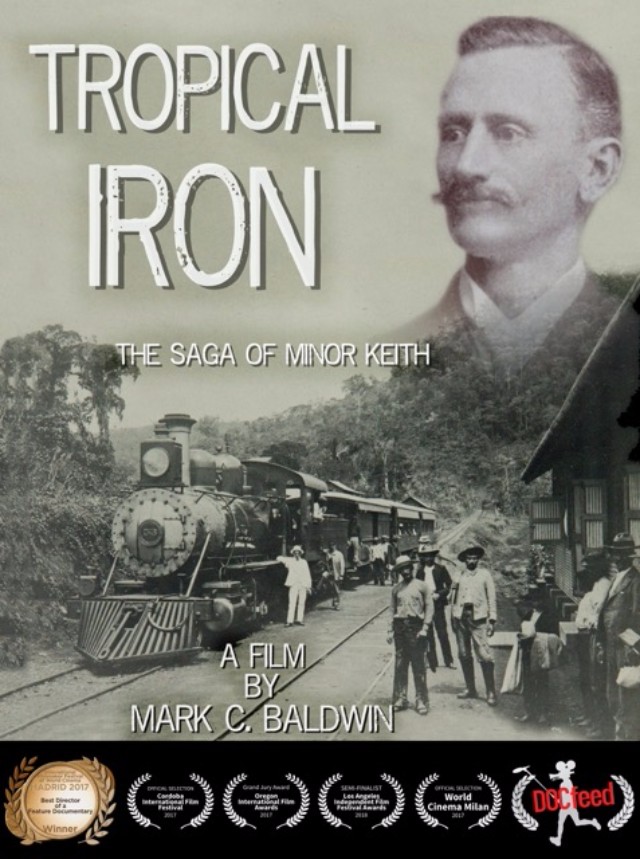 Tropical Iron is one of the 80 titles that will be screened at the 5th DOCfeed Festival. This festival will run from 22 to 25 February at various venues in Eindhoven and will showcase a unique selection of the most recent and inspiring documentaries.

One of these documentaries is Tropical Iron. This is the story of American businessman, Minor Keith, and the construction of the Costa Rica Atlantic Railway.

In the 19th century, the relatively straightforward task of laying 100 miles of track turned into an epic adventure, taking nearly 20 years to complete and resulting in the deaths of over 4 000 men. It bankrupted a nation and led to the establishment of the United Fruit Company, the largest agricultural enterprise in the world. This is the most controversial US company ever to operate in Latin America and is still seen by many to be the face of US Imperialism in Latin America.

Baldwin won the award for the Best Director of a Feature Documentary at this film festival in Madrid. He is a multi-talented film editor who has been in the industry for more than 25 years and has worked, as an editor, on series such as The Story of God with Morgan Freeman and Chigaco Hope, for which he was nominated for a Primetime Emmy for Outstanding Editing for a Series – Single Camera Production.

“At a time when the President of the US is making disparaging comments about countries in Central America and the Caribbean, it’s painfully apparent that few people have even the most basic understanding of the region, its people, and history”, says Baldwin. “I hope that the film provokes interest in the region, and helps provide a starting point for understanding how our lives are connected.”

Baldwin has a very personal, long-standing connection to Costa Rica. This inspired him to tell the story of the Costa Rica Atlantic Railway and its link to the United Fruit Company.

Please read my follow-up article about why Mark Baldwin decided to make this particular documentary and more about filming in Costa Rica.