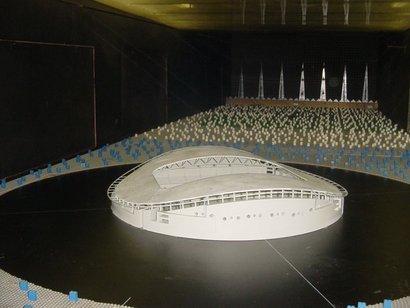 TU/e intends to build a new wind tunnel facility. The Built Environment department will use this ‘atmospheric boundary layer tunnel’ for tasks including research into the airflows around buildings, ships and sports players. Unlike most existing wind tunnels, this new facility will allow airflows just above the ground to be simulated. TU/e will be the first university in the Netherlands with a wind tunnel of this type. The new wind tunnel is expected to be completed in October 2015.

Most wind tunnels expose objects to a uniform airflow – like the situation high in the air. But the new wind tunnel at TU/e simulates the situation close to the ground, where the strength and direction of the airflow vary constantly. The ‘atmospheric boundary layer tunnel’ allows wind resistance, load and other wind effects around buildings, ships and sports players to be simulated precisely, taking into account the effects of surrounding buildings and other ‘wind obstacles’ on the airflows.

"This wind tunnel will enable us to carry out building research that is not possible in most of the world’s other facilities", says Bert Blocken, professor of building physics in the Built Environment department, who will use the wind tunnel for his research. The wind tunnel will have a length of 50 meter, so that airflows around large ground surfaces can be simulated. "That means for example that we will be able to calculate the wind effects on existing or new buildings in a city centre, or the distribution of air pollution over large areas", says Blocken.