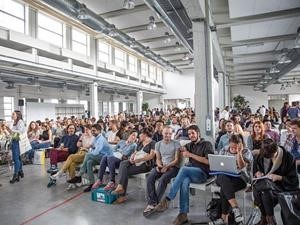 Widdershoven told the students and staff of the Design Academy Eindhoven "everything we are striving for in this unique institution is right there in the name. Design. What is it? Can we define it? It seems a bit of an enigma".

"The "What Design Can Do" conference in Amsterdam put it best: "The Designer is a Game Changer". This is a less pragmatic and more strategic view on design. But added to this we can see design as an experiment. Design as an innovation. There is design fiction and of course social design. The list goes on because design as a profession is still relatively young and is in a state of flux … which is all great because what we do still has the ability to surprise, and the capacity to change."

He added "But what does it mean to be an academy? As an academy our focus is on building and benefiting from a learning community that looks outwards to real-life collaborations."

Widdershoven ended by saying "I want to talk about the last cog in our title – Eindhoven. 95% of our Masters’ students and 60% of our Bachelor students come from abroad. We represent and reflect the multipolarity of a changing world order and Eindhoven is a major player in this global transition. This provincial post-industrial town was bombed by the British in World War Two, built by Phillips and then a decade ago was almost completely abandoned. The city is now being reinvented by high-tech industry and design. It makes it a fascinating place with an easy relationship with experimentation and creativity. Eindhoven has nothing to lose – it is a city in the making and the Design Academy Eindhoven plays an important role in that evolution."