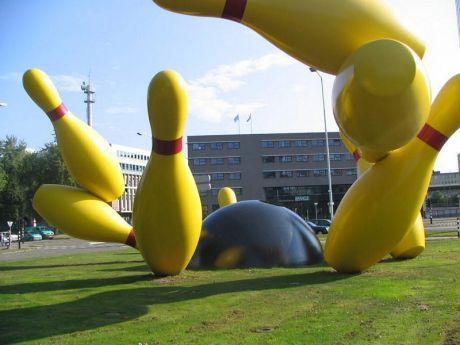 “The real voyage of discovery consists not in seeking new landscapes, but in having new eyes.” – Marcel Proust

I have been calling Eindhoven ‘Home’ for three years now. Quite a short span but it does feel like I belong here. During the ups, downs and the mundaneness of life in the city of lights, I have observed, been fascinated by and been angry about the various art forms in the city. It is a strange form of frustration when things are right in front of you, forcing you to see them but not revealing their purpose of existence. Adding to this are the various significant and not so significant monuments/paths and structures that stand as testimonies to something. This unknown ‘something’ has lead to my quest of finding more about these cohabitants of the city.

I believe – knowledge shared is knowledge earned. I also had a feeling that a lot more people are interested in knowing more about Eindhoven as well. It would feel nice to pass an interesting artifact and know what it signifies. Furthermore, I remember Hellen Keller’s words, "Knowledge is happiness, because to have knowledge – broad, deep knowledge – is to know true ends from false, and lofty things from low." So, I will be sharing my newfound knowledge on the city with you through small segments regularly. I am doing this with the hope that this knowledge brings you as much happiness as it has brought me.

The first segment of this series is going to be dedicated to the Flying Pins!

Having passed this beautiful, bright work of art on countless occasions, I couldn’t help but be amazed by this piece of art. The bright yellow seemed to brighten up even the dullest of days. I tried looking around for what it was called, why it was so huge and who created it. Finally I have found my answers, which I will now share.

The Flying Pins is an art piece designed by the art duo Claes Oldenburg and Coosje van Bruggen and was inaugurated in 2000. Through commissioning such a radical piece of art and hiring artists of international repute, the Gemeente (Municipality) Eindhoven wanted to profile itself as a futuristic city. The Gemeente Eindhoven wanted to herald the new millennium with a big bold statement. They wanted to commemorate their achievements in the previous millennium and start the new one in a positive ‘go for it’ kind of manner.

The art duo were briefed to come up with an ‘eye-catcher’ in the best possible location where this art would be viewed by as many viewers as possible. The green space at the entrance/exit (whichever side you chose to see it from) of the Kennedylaan was finally chosen because of its proximity to the center and its strategic location. Though faced with a lot of criticism because of the financial liability associated with an installation of this desired scale, the art managed to speak for itself and silenced its detractors after it was inaugurated.

The artwork itself comprises a bowling ball and ten bowling pins, with half the ball and some of the pins deep-set in the ground, making them partially visible. The artwork represents a ‘strike’ in bowling. A strike is a term used in bowling to indicate that all of the pins have been knocked down with the first ball of a frame. The artists have tried to stress on the exact moment when the bowling ball hits and displaces all the pins with the emphasis being on the moment. The larger than life representation of this moment through the artwork is not only extremely impressive but also represents the dynamics of living and working in the city. It complements the city’s dedication to the fast paced technical and innovative side balanced with sustained development and progress.

Seeing the Flying Pins now and in the future will always remind me of how interesting and exciting it is to live in Eindhoven, a city which rebuilt itself after the damages it suffered and today stands tall facing challenges head on and encouraging creativity and innovation in all forms.