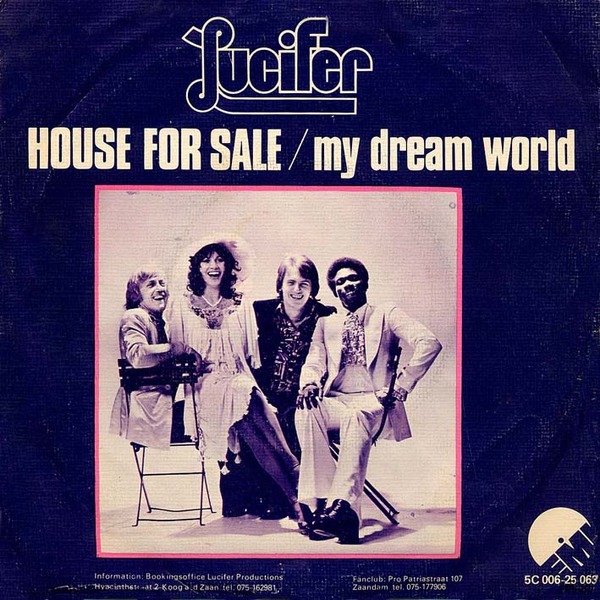 So, recently, I moved house. For your information: I now live diagonally opposite the Eindhoven News headquarters (so wave to me whenever you’re nearby).

I don’t think there are that many Dutch songs written about moving house. However, there is a recent one by Thomas Acda and Paul de Munnik, performing under their surnames (‘Acda & De Munnik’) called ‘De Kapitein Deel II’ (The Captain Part 2). I have no idea what happened to Part 1, but to be honest, that’s more about a couple divorcing and their completely childish struggle over who’s getting to take which book or cd with him. Or her.

No, there’s only one song that comes to mind when the subject is moving house and that song is called ‘House For Sale’ by Dutch seventies pop band Lucifer. Again, the subject is linked to some relationship problems, but even without that knowledge, you can feel the sadness of the singer when she’s walking through her empty house, or when she sees the sign in the front yard, telling ‘house for sale.’ You don’t even need to sell your house – like in my case – to get a sense of the sadness the singer is feeling just by walking through her former dwelling.

‘House For Sale’ was the biggest hit for the band Lucifer, who had minor hits with nowadays forgotten songs like ‘Scarlet Lady-I Can See The Sun In Late December’ and ‘Self Pity’ as well. When their success was halted with the end of the seventies, singer Margriet Eshuijs decided to start a solo career, albeit with a backing band. Again, she had one big hit, in 1982, with the song ‘Black Pearl’. Later on she started working together with Dutch guitarist Maarten Peters. He is probably one of the best yet not that well- known, Dutch guitarists. He also had some hits by the end of the eighties, ‘White Horses In The Snow’ being the most famous one.

Back to Lucifer. Coincidentally, Eshuijs wasn’t the only famous member of the band. The drummer became far more famous. His name? Henny Huisman. It was Dutch media tycoon Joop van den Ende who saw Huisman once introducing singer André Hazes in a football stadium and noticed his talent as a presenter. From the early eighties onwards, Huisman hosted various tv shows like the ‘Mini Playback Show’ (children lip-syncing a song by their favorite pop singer), the ‘Surprise Show’ (no further explanation needed there) and the ‘Sound Mix Show’, the latter being a more polite version of Idols/The X-Factor/Holland, Britain or [fill in your own country]’s Got Talent-format. Many famous Dutch singers like Marco Borsato, Gerard Joling and Edsilia Rombley had their breakthrough thanks to that show.
Basically, whenever the word ‘show’ was concerned, Huisman was there. Through illness he hasn’t done much television work lately but he’ll probably return back to the television screen later this year. Oh, and he did record some music in the eighties and nineties. But the less written about that, the better.