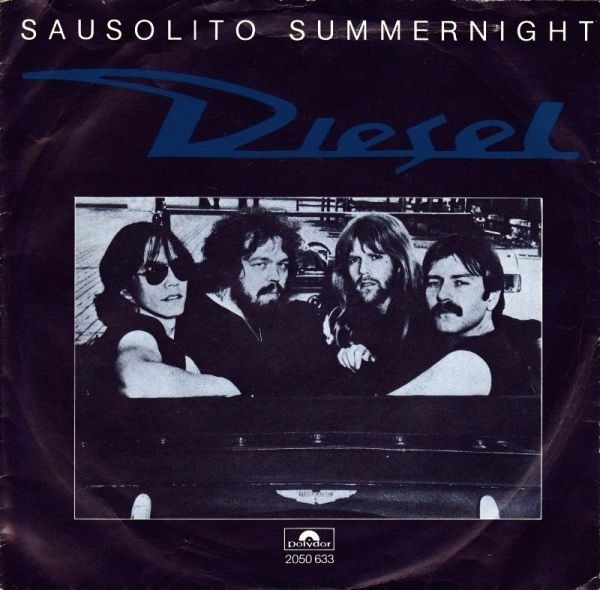 Voting for this year’s edition of the Top 2000 began last Saturday, so I’m shamelessly trying to get another personal favourite song into the Top 2000. Or even better, keep it in the Top 2000.

Diesel’s Sausolito Summer Night is probably not the most famous Dutch song ever. It barely reached the Top 40 chart back in 1980, the year of its release. The catch is that it’s still one of the biggest Dutch hits abroad. It reached a respectable 25th place on the Billboard Hot 100 in 1981. It even topped the Canadian charts. The reason is obvious: Sausalito Summernight is a glorious car classic, a west coast rock song that sounds more like the Steve Miller Band than the Steve Miller Band ever did themselves.

That was on purpose. Diesel was founded by Pim Koopman as a hobby project in 1978. He was the drummer of Kayak, probably the Netherlands’ most famous progressive rock band ever (Ruthless Queen is an all time classic), and formed the band with bass player Frank Papendrecht, singer/guitar player Rob Vunderink and guitar player Mark Boon. The debut album Watts in a Tank was a minor success, with single Goin’ Back To China reaching the bottom of the Dutch Top 40. By then things got serious. Because the band desperately wanted to score an American hit, they decided to compose a song that would fit perfectly on an American radio station. It worked, though originally the song title contained a misspelling; the neighbourhood in San Francisco that is mentioned in the title isn’t called Sausolito, but Sausalito. It didn’t matter for the success of the song. And when Watts In A Tank was released in the States, it reached place no. 68 on the albums charts.
After that, the troubles began. band members left, other members filled in the empty spaces, and their dodgy American manager left; stealing one hundred thousand dollars which was meant for the band to record a new album. Diesel never saw the opportunity to record a successful follow-up.

Sausolito Summer night is a radio staple in the Netherlands (3FM DJ Gerard Ekdom is a huge fan, he even recorded a radio jingle over the melody of the refrain), reaching the lower charts of the Top 2000 year after year (which is, in itself, no small feat. There aren’t that many songs that have been present in every edition of ‘the hit list to end all hit lists’).
Diesel itself still exists. Well, sort of.
Unfortunately, back in 2009 and within less than a week’s time in between, two founding members of Diesel died. On the 17th of November bass player Papendrecht suffered a heart attack and less than a week later Koopman died, also as a result of a heart attack. Vunderink started a follow-up of Diesel two years ago, with the name Deazol, but not much has been heard of the initiative since then.