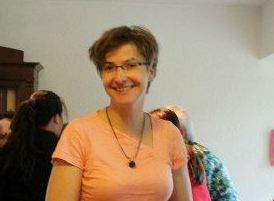 Monthly interview of an international (minded) person from our neighborhood by our in-house reporter Lisa.

On a lazy Saturday afternoon, I walked into Douwe Egbert’s Coffee shop in Eindhoven to conduct my first personal interview for Eindhoven News. I chose my first person, or victim, as she laughed, because we had one common interest, Stolpersteine. Meet Silke Georgi.

I had met Silke at a North American Women’s Club luncheon hosted at her home. And after adding each other on Facebook, she read my article* about the Stolpersteine (stumbling stones). She messaged me that she was very involved with the stones and asked if I’d like to help some day. What I discovered is that she is not only very involved with the Stolpersteine here in Eindhoven, she is also in the middle of writing a book about them.

Silke was born in Germany but moved to the United States just a few weeks after being born. She was raised in a “Currier and Ives” atmosphere in Boston as her dad was a professor of Theology for Harvard University. As both parents were German, only German was spoken in the home and English was spoken in school and in public. After attending public school she went on to Brandeis University in Boston where she studied politics. Silke then went on to Law school in Berlin where she arrived coincidentally on the day of Germany’s reunification. What an amazing day to arrive in Berlin!

Silke later married and had two beautiful children where they first lived in Aachen, Germany and then in Eindhoven, The Netherlands. She fully immersed herself into the Dutch culture. She learned how to speak Dutch, loving how similar it is to German. She quickly discovered though, that as ideal as her upbringing was, as wonderful as her background in education, even having a law degree, that simply was not going to work here in The Netherlands. She did not have a law degree from The Netherlands.

Silke began volunteering for many organizations. She spent many years volunteering for Vluchtelingenwerk, a nonprofit organization that helps refugees. It was very humbling for her to go from earning a law degree to making coffee and other simple tasks. But she discovered a love for helping others that were new in the area. As her desire to do more increased, she went on to an organization called Indigo World. Here Silke worked on a variety of projects geared towards bringing people from different worlds together. She is proudest of a project she helped to initiate at the Technical University of Eindhoven, working with the wives of PhD students from countries all over the world. She says “it is mindboggling, the amount of talent and ambition that these women have which is going completely unnoticed here in Eindhoven”.

About a half a year ago, after a chance meeting with a friend, she received a job practicing law with German clients at the law firm of Swart [&] de Schepper. “It is quite extraordinary to have found an employer who sees the benefits in that which I have to offer as an international and doesn’t zoom in on what is missing on my résumé according to a Dutch context”. She is also involved as a liaison where she works with a language and translating company. The company called Forefront matches translators from around the world.

It was beginning to get dark outside and we knew our afternoon needed to end, but I had one more question. Tell me about your involvement with the Stolpersteine. She smiled and began her story how she stumbled upon the stones. Near her vacation house in Germany Silke had one day discovered a Stolpersteine. Being curious, she did a little research to see what they were about. She then wondered if there were any in Eindhoven. Silke discovered there was a man by the name of Phocas Kroon that had just begun a project here in Eindhoven. He had begun researching the history of each of the 800 Jewish people living in Eindhoven at the beginning of the war in 1941. Silke quickly joined in the effort to help with honoring each of the 246 murdered victims by pouring through documents, photographs and interviews with family members and much more. Silke is now in the process of writing a book about the Stolpersteine. With financial help from her Alma mater Brandeis, she will soon be able to share this story with others.

We smiled and hugged goodbye. We both knew that this meeting was about an interview, but what had taken place was the beginning of a wonderful friendship.

In Step with Silke Georgi… this amazingly intelligent, funny, kind woman was a pleasure to discover.