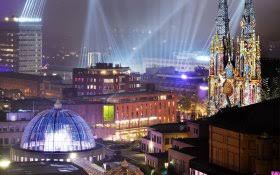 It is in the middle of the night. Looking for another bar to hop in. We don’t think that we are drunk enough to go back home. We are looking for 60’s, 70’s and 80’s pop-rock. Rare amount of bars play that music. Did we already get old? Or maybe the city got younger.

After leaving another electronic disco music playing bar, disappointed, my friend and I are wandering the streets, holding each other because walking and talking is becoming challenging as the amount of the alcohol in our blood is increasing.

Suddenly my friend stops. He looks at the surroundings, the buildings and streets. And he asks with an appalled face:

My friend is a real “Amsterdam-er”. Born, raised and studied in Amsterdam. And also a true Amsterdam lover. I also look around but don’t see any ugliness. I put for a minute his arrogance aside and follow my emotions. Sadness slowly settles in my stomach. And that surprises me, because I am not even from Eindhoven. I am just an expat. Does that mean Eindhoven became home? What does make a city beautiful? Can this be objectively defined? As a globe we became obsessed with body image and physical beauty, which discredits everyone else, who doesn’t comply with those beauty standards. Do we do the same thing to cities?

The next morning I decide to have a solo city tour. Me and Eindhoven. I need to know why I feel the way I feel.

I think of all the well-known “beautiful” cities that I visited. Amsterdam, London, New York, Barcelona, Istanbul…. There is little doubt about their obvious beauty. Historic buildings with fine artwork, with cute tops and of course the uniqueness. Eindhoven doesn’t have any of those. This city has another side. A different kind of inspiration. Maybe a darker one, but a true glitz and glamour is hidden underneath the city lights.

I see the beauty in the weathered Philips buildings that are encircling the feeling of decay. Reminds me that everything is temporary and change is inevitable. I imagine about the people who used to work here, looked through the windows with worries or happiness. I look at the former factories, now well restored residence buildings, standing right next to a decaying one with broken windows which allures the attractiveness of the restored residence. Reminds me of the polarity. Without having polarity, there is no chance to understand any concept. What does “good” mean, if there is no “bad”? What does a charming, newly built residence mean, if there isn’t any worn and neglected one?

I see the industrial footprint maintained in the new residential places. And a true feeling of appreciation arises. The architect must have seen this hidden beauty. The elegance of the working class is still shining like a bright light.

Eindhoven is like the real life. It is rough, bumpy, subject to constant change. It is decaying and at the same time being renewed. It has full of surprises. You can enter a seemingly inadequate building, and witness the most recent technology fresh out of laboratory, which blows your mind away. Or witness the most eccentric modern artwork.

You don’t get to criticize a city. Because its beauty is in its story. When you live in Eindhoven, and if you open your eyes and see that hidden charm, which has penetrated into its bricks and its air, then you become one with the city. Because Eindhoven is as real as we individually are. Maybe a little sad, here and there abandoned, but quite refreshing, hopeful, happy, uplifting and extremely intelligent.

9 August 2022
The counter stands at more than 25,000 visitors at World of Dinos and that is a record according to the organisation. "We have never...

Here you can see how a huge tunnel is pushed under...