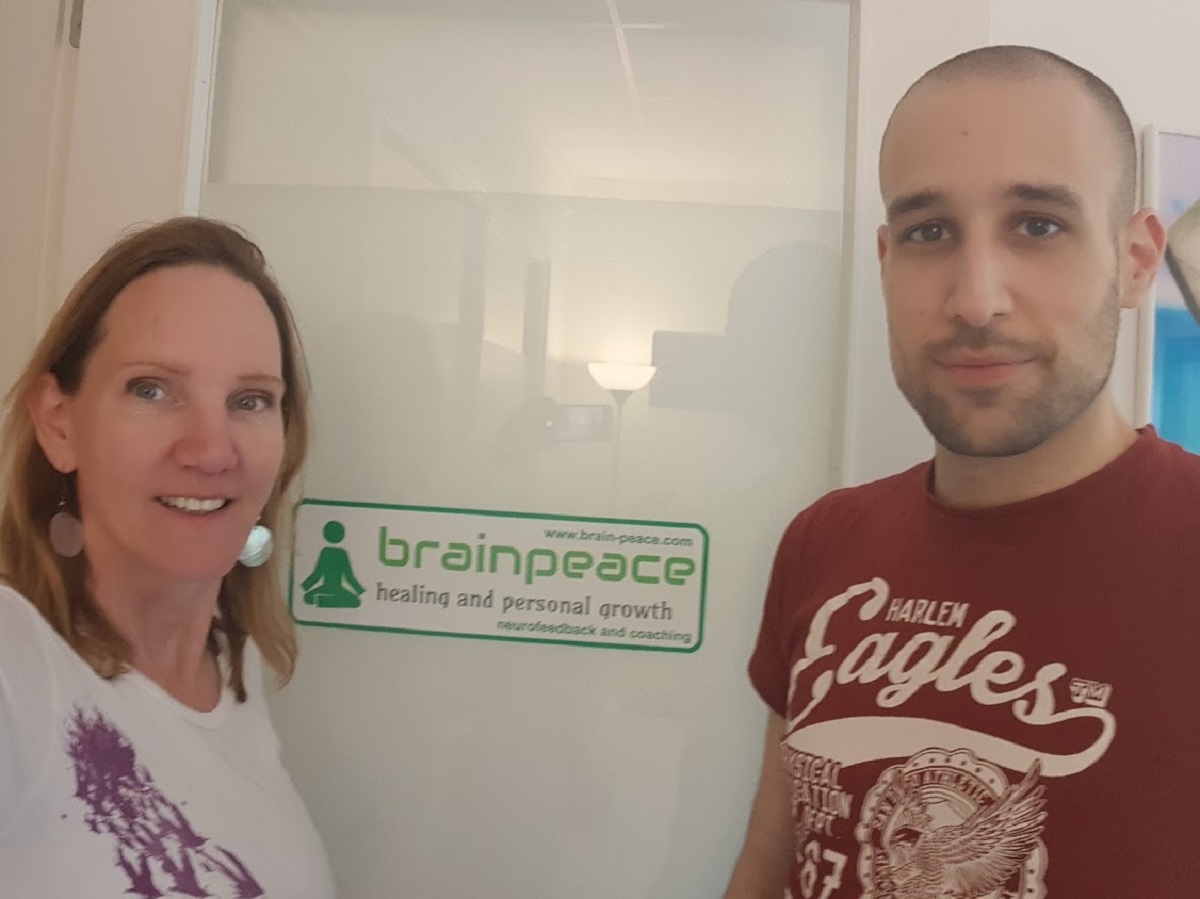 Meeting him again at another event halfway this year, again it raised my interest and curiosity. Human psychology, raising consciousness, healing, are subjects I am very much interested in. Nick offered me to try it out. I am in for experiments!

As reporters of Eindhoven News we have these opportunities. We can experience something and write about it, and on the other hand, we give publicity to the other party.

I went to the office of Nick in Paradijslaan where he has his company called Brainpeace. The talks I had with Nick were already very interesting; talking about becoming still in your mind, surrendering, becoming more conscious, healing trauma, spirituality… there were a lot of subjects we could exchange thoughts about.

Nick has a very peaceful and friendly personality, and according to him, neurofeedback training helped him a lot.

At first (and maybe I still am), I was confused about the word ‘training’ as I expect something different when I hear ‘training’. In fact, in general, there is just a short talk between Nick and the client, depending on the need. And after that, you get to lie down on a couch and there is hardly any more communication between client and trainer until the end of the sessions.

So what happens during the sessions:

I can just describe my experience of course.

Little sensors are glued to your head (not to worry, Nick removes this tiny little bit of glue afterwards) and are attached to your ears. You put on the headphones and that is it.

The sensors are connected to his laptop on which Nick has the neurofeedback training program.

In one of the last sessions he had become the owner of another piece of (expensive) equipment. A program which graphically displays your brainwaves. So after a session, you can see the activity of your brain and you can compare it to previous sessions. 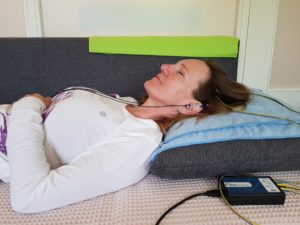 You just lay down and listen to the, mostly tranquil music. Which you hear skipping or interrupting, softly. It didn’t disturb me.

As always, thoughts come up, feelings are felt. You don’t need to do anything. You even can fall asleep.

As I like to describe it, in my own way, what happens technically is that it is a kind of a fast meditation.

In meditation, to my idea, what you do is that when thoughts come up, you become aware of it, and with this awareness you break the thought. And again you try to be thoughtless. Again and again, for months and years, you repeat this. During this practice, what happens in your brain is that the usual connections made between your neurons (neurons are the ends of the millions of ‘threads’ you have in your nervous system) are interrupted. The connections made by your neurons (they literally connect one thread to the other like an electricity cable) basically are always the same. And therefor, you will always be stuck in the same loop of behaviour, thought patterns, pain reflexes. Over and over again. (You know ;-)). Through (traditional) meditation we keep on breaking this (habitual) loop, by coming aware of the fact that we are thinking, so the neurons will (have to) make new connections. With these new connections we bit by bit are released of old patterns, throbbing thoughts and usual reaction to pain impulses. We create new ways. Our minds also become more still.

In Neurofeedback, this is my explanation, this process is done for us and much faster. The music which interrupts, interrupts our loops, our patterns, our system. The computer program where the sensors are attached to, detects a certain level of brain activity and interrupt.

Easy as that isn’t it?

If this works, shouldn’t everyone be ‘forced’ to lie on this machine and get relieved of old trauma? Or is this the big solution?

I had eight sessions. What did I notice? Oh yes, before the first session you have to fill in a list of 70 questions on how you feel or experience certain things now. Like ‘do you feel stressed’, ‘do you experience anxiety’, or ‘how is your sleep’ etc, and give it a number from one to five. And after the last session, you again have to fill in this list. I had several ‘better’ scores.

I think I noticed most after the second session. My brain can be quite like a Pitbull. If it gets on to something it doesn’t let go. I noticed I had certain (unwanted) thoughts and I could let go of them easier.

Also, I realised that several times I really couldn’t be bothered about thinking about something, things which I would have clung on before. I felt more at peace and could let go of them easier.

I had a fright once too: I needed to remember something and I couldn’t… I was afraid that my ability to remember reduced. But this only happened two times in the beginning.

What else, there were moments that I was really troubled by certain things and I think I was troubled less than before, I was less determined.

I think that can be said in general, my mind is a bit less persistent… it is not so hooked up as before. More mild, softer, ‘oh, let it go, it doesn’t matter, it is not so important’.

Is it earth moving? Or am I changed a lot? It is not a miracle therapy, and I think, everything comes at the right time.

8 Sessions aren’t that many, according to Nick, we barely scratched the surface of what can change with more training. One can say that with every session the brain gradually learns to come back to the present moment, and the more training occurs, the better the brain is able to do that, more often, and faster. Under the right training, our brains are extremely capable of letting go and surrendering to the present moment probably more than we have ever imagined but probably won’t happen with only 8 sessions.

But if you are open to it at a certain moment, if also in other ways you are ready for a change, then it can make a difference. I think you have to be open to it on more levels and have to fly in from more directions.

It is not that you can just lie down, and the machine will do the thing for you, I guess you need to integrate it in various ways and be prepared to do things differently.

Everything will happen at the right time.

Thank you very much Nick! It was an interesting experience.

Prize for Eindhoven start-up: praise for new technology to combat...

27 September 2022
InnoSign is one of the companies to receive the Gerard & Anton Award. The Eindhoven start-up has developed key technology which will contribute to...