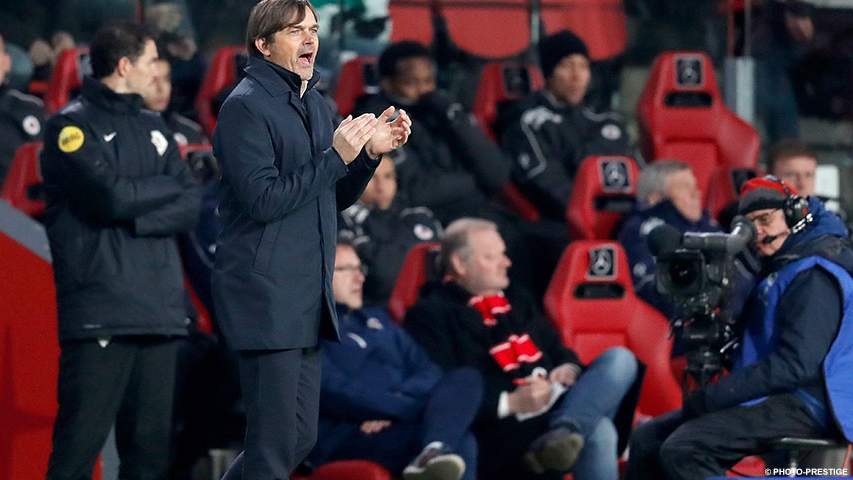 Early this season, it was Heerenveen who sent PSV home with 0 points and a red card for Hirving Lozano. Nothing after that weekend suggested the glorious lead position Phillip Cocu’s squad have today. But he surely still wants to see his boys to take revenge on the Frisians, this Saturday at the Philips Stadium.

After 6 minutes already, PSV were facing a disadvantage against the number last of the Eredivisie. Former PSV coach Dick Advocaat’s new team kept the lead until the 41st minute, when Steven Bergwijn scored his first beauty of the night. Referee Bas Nijhuis later got a lot of critique for the tackles and charges he allowed, forcing Cocu to take ‘Chucky’ of the pitch and keeping Luuk de Jong off the training field the day after as well. But first, PSV’s captain offered the same Bergwijn a perfect chance to score his second beauty of the night and put the 1-2 on the scoring board. PSV went home to Eindhoven with another 3 points, frustrating both Sparta and main rival Ajax, who now had to win their own game again in order to bring the 10 point gap back to 7.

Luckily, Lozano and Bergwijn could rejoin the training sessions on Tuesday, while captain de Jong needed an extra day. The first choice of captain Marco van Ginkel is still injured and awaiting the results of a new scan of his knee. It would be a heavy blow for both the club and the player if he would need surgery again, but for the moment there are no indications it’s looking this serious. Maximiliano Romero still isn’t fit enough to join the groups training, whilst Kenneth Paal needs some separate training as well. Apart from this, Cocu has a completely full selection of fit players for the match on Saturday.

Sports Club Heerenveen has a mediocre season so far. With only 31 points so far, they are 30 points behind on PSV and their 9th position on the ranking doesn’t really satisfy anyone. The team of Jurgen Streppel has trouble scoring (only 32 so far) and simply need to win more if they want to keep the play offs for European football in sight. They gained 8 points in their last 5 matches, but 7 of them were won at home over 3 matches.

The blue-whites’ strongholders of this season are right back Denzel Dumfries and midfielders Morten Thorsby and Stijn Schaars. All three work hard, give assists and score goals. Michel Vlap and Pelle van Amersfoort are great talents, and even though they have another great talent in Martin Ødegaard from Real Madrid, and strikers with scoring capacities in Henk Veerman and Iranian international Reza Ghoochannejhad, finding the net is a major challenge. Maybe the comeback of Kosovarian international Arber Zeneli is right in time to save the season from resulting in…just nothing.

Throughout history, PSV played against Heerenveen 64 times, won 35 and lost 14 matches. At home, PSV and Heerenveen played 27 competition matches, of which PSV won 17 and lost 5. PSV scored 68 goals and conceded 30. Heerenveen beat PSV in Eindhoven for the last time on February 27th of 2009, but took a point home twice in the last 5 years.

During playing round 4 of this season, Heerenveen beat PSV with 2-0. Heerenveen’s biggest home victory dates back to the season of 2001/2002, when they sent PSV home with a 4-1 loss. 10 years later, PSV took revenge and set the record of their biggest away victory against the Frisians to 1-5. But in the last 5 years, PSV only took 2 points home from Heerenveen. So, also in order to keep a bit of a balance, it is important that PSV makes sure to keep the points in Eindhoven this time.

For the last updates in English, go to the PSV Eindhoven International Facebook page