Eindhoven got what it wanted: a Christmas celebration with PSV as Winter Champions. With one more match to go for this year, the terrible start of the season has been long forgotten and there is a good reason for hope on a new national title at the end of it.

After an unusual week with 5 points lost against Ajax and FC Groningen, PSV picked up their winning streak again. First they beat ADO Den Haag with 3-0 for the competition, then they kicked out VVV-Venlo from the KNVB Cup tournament with 4-1. Keeping Ajax behind with 5 points is important on many levels, especially with the winter stoppage coming up. Also, knowing there’s another Cup match coming up after new year’s is a comforting thought, especially with the knowledge that Ajax were kicked out by Twente, and Feyenoord are still in, most likely able to focus on only 1 prize, looking at their 14 points disadvantage in the Eredivisie.

Feyenoord away in quarter finals

The drawing of lots connected PSV to Feyenoord, at the stadium of the reigning national champions in Rotterdam, scheduled for late Januari 2018. Feyenoord won the KNVB Cup 12 times in history, the last time in 2016. PSV took the Cup home 9 times, the last time in 2012. PSV hasn’t looked very focused on winning the national cup as much as reaching as far as possible in the Champions League tournament over the years. But without any European football in Eindhoven this whole season, it’s obvious the management expects at least one prize to be taken home before summer. And as long as they can get two, that will be the goal.

Having drawn Feyenoord away means it will become an epic match: as mentioned before, they are most likely unable to make up the 14 points disadvantage in the Erevisie, so they will surely put all their money on winning the KNVB Cup. It will be a clash with international allure and a moment of truth for both teams. If PSV are playing this match with the same intentions as they did against Ajax, when there was still a 10 points difference, we all know what we can expect. And that would fan the flame of discontent about Cocu´s style of coaching once again. But the affiche is a wonderful one, even though with an advantage for Feyenoord, because they play at their home stadium De Kuip. Nonetheless a match to really look out for early in the new year!

Beside the good things that happened for the A-selection, everything else around PSV also kept going. For example, the Under 16 beat Ajax Under 16 and took the lead position on the ranking. PSV’s Under 21 lost the Premier League International Cup match against Liverpool Under 23 with 3-0. PSV Women’s central defender Aniek Nouwen was anounced talent of the year of Deurne, her place of residence. The 18-year-old had a great year, playing for not only PSV, but also reached the semi-finals at the European Championships with the Dutch National Under 19 squad. This season, a tough one because of all the injuries in the selection, she is fighting for a place in the top 3 with her team and personally is the second best goal scorer as of yet.

Together with VVV-Venlo and the amateurs of VV Una, PSV raised € 38.800 for social partner Spieren voor Spieren (Muscles for Muscles). This organisation is trying to ban out all muscle diseases and give children more possibilities to participate in society. Ex-PSV player André Ooijer is one of their ambassadors and received the cheque shortly before the start of the game.

Yesterday, Maximiliano Romero signed a contract with PSV until 2023. The 18-year-old Argentinian striker will come to Eindhoven as of July 2018 and is currently playing for Vélez Sarsfield in Buenos Aires. He was on the radar of England´s Arsenal years ago already, but got injured at his fifteenth and needed time for his comeback. The also interested German VFB Stuttgart congratulated PSV days before the official signing, but this week it appeared Borussia Dortmund showed interest in signing the striker as well. Whatever was true of those rumours, they have been laid to rest by Marcel Brands, who once again proves to be a technical manager who perseveres until the ink is dry. You can watch some of Romero’s highlights so far through this video 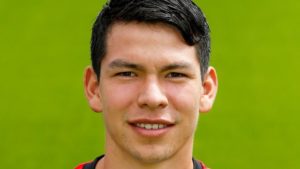 Fox Sports are premiering a documentary of the immense popular Hirving Lozano, coming sunday at 20:30 hours, Dutch time. It is called Het ware gezicht van Chucky Lozano (‘The true face of Chucky Lozano’), and will dive into Hirving’s family life, offer an insight into where he grew up and showcase how he became the person and football player he is today. It will be broadcast also every evening after the premiere as well, until the second of januari on Fox Sports.

Last match of 2017 against Vitesse Arnhem

It has been less than two months ago that PSV beat Vitesse at the Gelredome, and now the Arnhem squad returns to Eindhoven for the last match day of 2017. Currently, they hold a seventh position on the ranking, with 19 points less than PSV. Some members of the selection and technical staff of both clubs have a history at the other club as well: Vitesse’s head coach Henk Fräser was a youth trainer in Eindhoven between 2009 and 2011, striker Tim Matavž performed here between 2011 and 2014, while wing-back Alexander Büttner was named in the media as a possible signing for PSV at the start of this season. PSV’s head coach Phillip Cocu performed in Arnhem from 1990 until 1995, just before he made his move to Eindhoven. Assistant coach Chris van der Weerden played for Vitesse that last season as well, while captain Marco van Ginkel is a product of their Youth Academy.

PSV have played 33 home matches against Vitesse, won 25 and lost only 5. The last time this happened was on 7 December of 2013, when PSV got a serious spanking and had to deal with a 2-6 defeat. Vitesse are steady a club in the Dutch subtop, but never won a single prize until last season: they beat AZ in the finals and won the KNVB Cup, exactly two weeks before their 125 years of existence. This season, after 16 matches, they have 24 points, 29 goals scored and 20 conceded. If they lose this match, they also lose sight on the subtop positions on the ranking and tumble down to the middle section of the Eredivisie.

PSV won the last eight matches against Vitesse and have an almost entirely fit selection once again. Of the basic players, only Jürgen Locadia is injured for at least another 4 weeks, he has been replaced by Steven Bergwijn in the last 2 matches. This season’s average for PSV is a 3-1 victory, Vitesse keeps it to a 2-1. Playing at a full house at the Philips Stadium obviously should make it easier for Cocu’s men to also keep the last 3 points of this season in Eindhoven. Second runner-up AZ are playing at the exact same time as PSV, against Heerenveen, while first runner-up Ajax have their last match of 2017 scheduled at 14:30 on Sunday. They just got their technical staff fired, so it will be interesting to see how everything develops in Amsterdam from now on.

Join the conversation on Facebook at PSV Eindhoven International