Twenty-six students from twenty-one different primary schools in the Eindhoven region are in the running for first place during the annual Groot Augdictee (a spelling competition held in Secondary school Het Augustianum). More than 100 visitors attended the writing event on Wednesday.

The nerves can be read on the faces when the dictation notebook is handed out. Although many find it exciting, not all participants are so nervous. Andya is one of them. “It’s nice, but I don’t think it’s that spectacular. The kids in my class aren’t very smart so it wasn’t hard to win the preliminaries and be here in the final.”

Children’s book author Gideon Samson wrote and read the dictation Climate Splits to the finalists, but such a dictation was not made very quickly. “The dictation has to doable. I didn’t want to put make it a string of impossible words and traps, but I don’t think anyone will score 100 per cent. I would find that special.”

The theme of the dictation was just like the Children’s Book Week Gi-Ga-Groen. “The dictation has a message with a wink that we should be kind to the world and we should make the world even greener,” says Samson. “But it also has to be a fun story. The children must have fun and enjoy doing the dictation.”

But not all children are well prepared for the dictation. Participant Ahmed took things in his stride. “I paid more attention in the language lessons, but I didn’t really practice much beyond that.” Participant Lotte also wanted to practice more. “We didn’t get much practice so I didn’t prepare very well.” 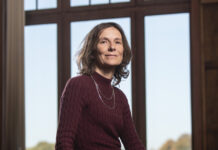