A zebra crossing in the colours of the rainbow flag. This had to be built on the TU/e campus. The LGBT community received money for it in 2019 from the diversity fund. However, the zebra crossing will not be constructed.

Compass, which represents the LGBT community at TU/e, won the diversity prize in 2019 for the idea of the zebra crossing. But that prize was awarded without permission for the construction of the gay crosswalk from the quality committee, Cursor writes. This committee deals with adjustments to the outdoor areas of the campus.

According to the committee, the idea of the zebra crossing did not fit the campus. The quality committee would have preferred to see diversity reflected in a work of art. But permission for this had to be obtained from another committee: the art committee. That committee also gave Compass a negative answer.

Surprise
“I heard that the art committee has the opinion that art should not be a means of communication,” Ludo van Meeuwen, treasurer of Compass, says. “They also did not want to commission an artist to make something about diversity, but they told me that they always take diversity into account when selecting an artist. Then I expressed my surprise to the diversity fund itself, because I had also received positive expectations from the Executive Board about the rainbow crossing”.

Bernard Colenbrander, who is a member of the quality committee and chairman of the art committee, says that “the high aesthetic quality of our campus is the result of a precise policy of art application”.

Agitprop
On the criticism of the art committee, Colenbrander tells Cursor that art should not be propaganda. “Art does not serve a communication purpose, it is not a vehicle for a message of something else. That is indeed what we think. Nevertheless, art can have a content, but that content is primarily artistic. So no agitprop (agitation and propaganda, ed.)”.

In the meantime, Compass informs us that an alternative for the zebra crossing has been found. The money from the diversity prize was used to design postcards with the theme of diversity. The cards are available from this week onwards from the card stands in the Atlas and Metaforum buildings and in the Hubble café. 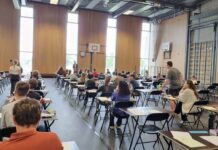