Imagine pedalling on a bike in a sports centre, while finding yourself in a futuristic world or the Austrian mountains. You can, at Cycledome, a new attraction in Strijp-S.

A huge screen is located in residential block 59 on the former Philips premises. Cycledome is part of a new innovative gym in that block. Anything can be played on the screen, such as a special mountain ride or a surrealistic world. The idea behind it is that indoor cycling should be a lot of fun. A new dimension is added to the sport.

In addition to the large screen and the futuristic look, the bikes also light up. The colour says something about how hard you need to pedal. White, for example, is very light, while red requires a lot of pedalling.

According to the owner, a bicycle attraction like Cycledome is the first in the Benelux region. 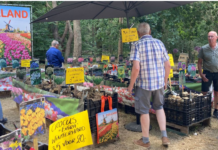