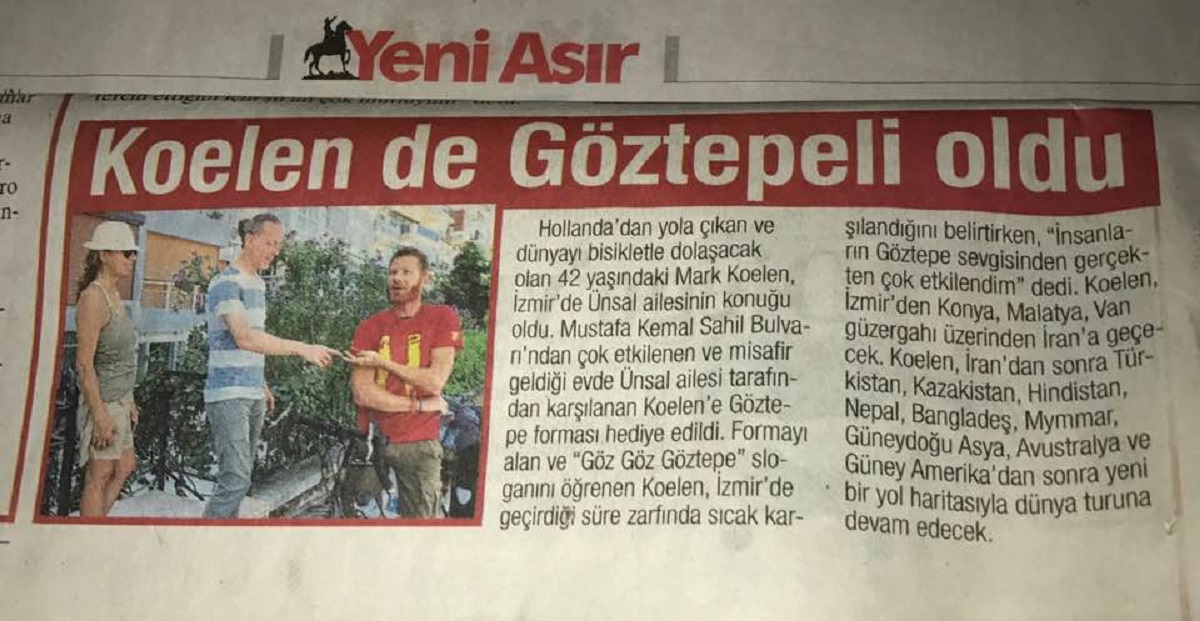 Mark Koelen, who hails from Eindhoven, recently started a two-year cycling journey across the world. He is in Turkey at the moment where, thanks to an Eindhoven network, he received a warm welcome.

No money – just his bike, some clothes, his cell phone and himself.  The mission of Mark Koelen is to show that the common denominator of our human nature is kindness, not aggression as often portrayed in the media.

Mark had his bicycle stolen on the eve of his departure in June. He saw this as a goodbye signal of the “bad world”. It also showed how supportive people from around the world can be. The call through Facebook that his bike was stolen got instant reactions. He eventually set off with far better equipment than he had assembled himself. His plan is to travel through Europe, Turkey, Iran, Tazjikistan, Nepal, Indonesia, Australia, New-Zealand and back via South America.

A few weeks earlier he met with the  STIR/ Stad van Morgen (City of Tomorrow) foundation and they learned about his plans. This foundation has introduced and is operating a new societal model. It is based on shared responsibility by using core human values, such as health, safety, co-creation and awareness of the four basic human necessities: food, water, energy and oxygen. The model is referred to as Sustainocracy. (Sustainable human progress and democracy). They have a global mission and see this as an evolution in human interaction surpassing the political economic steering that is causing all the pains in the world today.

With this in mind, they decided to follow Mark’s voyage and show the world that humankind, in essence, is a peaceful global community, with hospitality, compassion, and kindness at its core. Over the past few years, the foundation has received 1 500 students from Turkey through European exchange programmes. They introduced Sustainocratic values to them in a practical way. The network of partners and friends that has been established in Turkey is now standing at the ready in every city along Mark’s route through the country. The media are covering his story and he is being received as a special guest by political leaders. His popularity is increasing and his adventure is being followed back into the Netherlands too.

The adventure does not stop at the border of Turkey. People associated with Stad van Morgen Foundation hope to get their family and friends in Iran to show the same kind of hospitality to Mark. If this works, it may well be the case throughout his entire voyage over the next two years. If the chain is interrupted, the foundation can set up a new one thanks to the good relationships Sustainocracy enjoys throughout the world. The international community in Eindhoven can help with this as well. 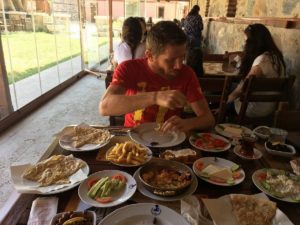 Mark is just cycling along and as he goes, he leaves a trail of compassion, comradery, and happiness in his wake. Eindhoven’s own local global community supports Mark when he reaches their families and old home towns. Mark is experiencing and highlighting  interconnectedness on a global scale with a bicycle as vehicle to spread the message of core human values.

Thanks to Jean-Paul Close – STIR Foundation