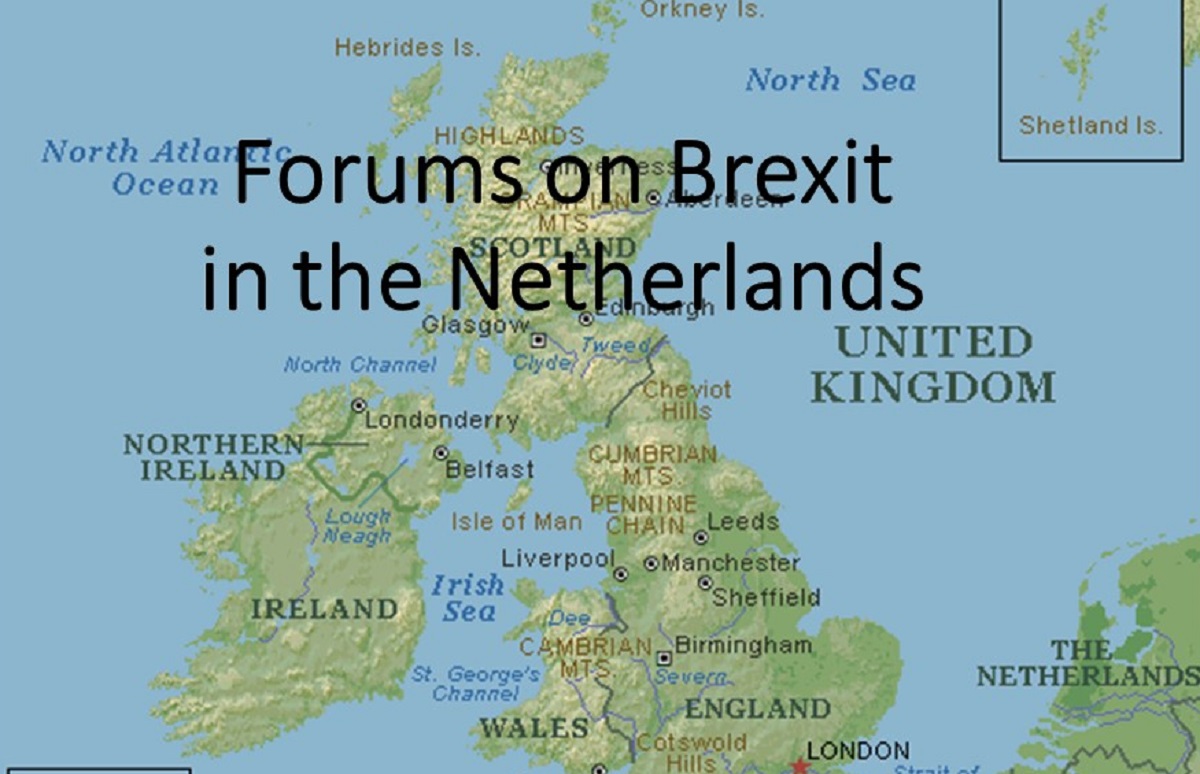 On Mon 12 June 2017 Mrs A. Sharma attended the Brexit Open Forum in Waalre held by the British Council to inform British citizens living in the Netherlands. Here you will find her report on the forum.

This forum gave us the opportunity to listen to the British Councils thoughts on the implications of Brexit and to ask a few questions. As expected a lot of the answers were ‘we don’t know yet’ but here is my summary of what we heard.

The British Council’s position is that as far as they know the Brexit process will proceed as was planned before the election. From the UK government’s point of view, the authoritative sources are the White Paper on Brexit and the text of the letter written by the PM on March 29th to Donald Tusk invoking Brexit (both of these are available online)

The negotiations will start on Monday 19th June and the process lasts until March 29th, 2019

The negotiations will begin with ‘talks about talks’ – setting out who does what, the structure, rhythm, and pace of negotiations

It is likely that there will be regular statements issued regarding progress – these may be official statements sanctioned by both sides, or released separately

The EU commission has a mandate from the 27 EU states to negotiate on their behalf – ie the British side will not be negotiating with 27 separate people
On 22nd March there is an EU Council meeting – a get together of the EU heads of state. There will likely be further statements then.
There are many issues to discuss and negotiate and a final agreement won’t appear until the end of the negotiations EXCEPT as regards the position of EU citizens in the UK and British citizens in the EU. There is a general agreement that this should be decided as soon as possible to give some degree of certainty to citizens near the beginning of the negotiations. The representative from British Council in the Hague said he would be surprised if the agreement was not in place by early autumn. This means that the terms of the agreement would be clear even though they will not come into force until the rest of the agreement does – March 2019
ie we should know what the actual implications will be regarding our rights in the EU approximately 18 months before Brexit actually happens
They may also state what the implications on citizens’ rights are even if the larger deal is not reached
The general feeling is that all sides want to pursue a generous deal on citizens’ rights. There seems to be a willingness to keep this part of the negotiations separate from all the rest. Is the deal on citizens’ rights should not be used as a bargaining chip in other negotiations.

The final agreement as regards Brexit will need to be voted on by the houses of parliament. This may also apply to the agreement on citizens’ rights.

Some of the questions –
Will there be any flexibility re the deal by different countries
– Citizenship & access to benefits has always been decided per nation. The EU treaty provides an umbrella agreement over the EU countries. That is what is being negotiated but individual nations may interpret it differently or apply the rules in a slightly different way

What happens if the 2-year negotiating deadline is reached and there is no agreement
If there is no overall deal it will be very messy. Some things like trade agreements can reset to a default position like that set by the World Trade Organisation. But there are no default positions on financial obligations, air services and many other things
There is an option of an extension of the article 50 process (?12 months)  if all 27 EU states and the UK agree
Some parts of the deal may involve transitional arrangements

Should we be applying for NL residence permits?
This would probably guarantee right to remain in NL but advice at present is to wait and see what happens in the next couple of months when there should be a statement re citizens rights

What are the possibilities of a ‘European passport’ or ‘European Citizenship’?
The EU is not a state and these things are generally given by states. There has not been much said on this. It is only an idea at present

What about dual British Dutch Nationality for those not with Dutch spouses?
The UK has so far been relatively relaxed about dual citizenships. The issue has been with the dutch side. The British Councils rep will bring this issue up with his dutch colleagues

Should we get British Birth certificates for children born here?
Many people already do this. He didn’t think it would offer many benefits but definitely no harm doing so

Does a ‘verblijfsvergunning’ give indefinite right to remain? Can it be withdrawn?
He didn’t know

General Stuff
There are equivalent numbers of Dutch in the UK as Brits in NL (Approx. 80,000) so it is in both sides interest to have a good result for citizens rights

According to the representative, Eindhoven Gemeente has an expat group where you can register to stay informed of developments. He thought this covered all of Limburg and Noord Brabant – (please check with the Holland Expat Center South).

There is another of these sessions in Amsterdam Monday 19th 17:30. They are hoping to livestream it on the British Embassy in the Hague FB page. Check the program on their Facebook page.

Keep up to date by liking the British Embassy in the Hague FB page, get added to their email list – email your request to ukinnl@fco.goc.uk to be added

You can look up the Working Paper on Essential Principles of Citizens Rights on the EU council website here.