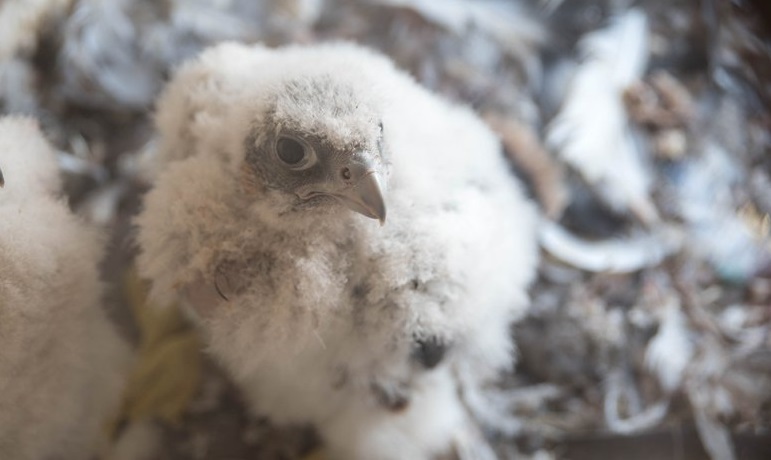 This week, the first one of the three eggs of the peregrine falcon couple, housing in the tower of Catharina Church, has hatched.

Recently, the female has laid her eggs and it is expected that the other eggs will hatch soon too. You can go to http://eindhoven.peregrines.nl/ and have a peek yourself to see what’s going on. The image is refreshed automatically every ten seconds.

Dedicated volunteers want to make more people aware of the conservation efforts to keep the falcons thriving, that is why they have placed the camera in the nest late last year (2015). They also have made and installed nesting boxes that are safe for the falcons to raise their chicks in.

A new favorite spot of a pair of falcons is located on the south tower of the Catharina Church, in the downtown area. Apparently, they don’t much mind the tolling of the church bells, and perhaps the tolling is now the signal for the falcons to pluck another pigeon or other unfortunate bird from the sky. They can do so with speeds upward of 200 miles per hour.

Eindhoven’s more recent additions such as the Vesteda Tower and the Admirant, but also much older buildings such as churches, have done wonders to lure peregrine falcons to town in recent years. These skyscrapers and other tall structures are a newly adopted habitat for the falcons, as they naturally lived on steep cliffs, from where they can swoop down and get their feathered meals on the wing. Now that people are busy to reach for the skies, building high-rises (and feeding the local pigeons a lot of bread), the falcons follow to where life is good for them and Eindhoven has a lot to offer for them. But luckily they don’t fancy humans, or we’d have to walk hiding underneath an umbrella during shopping or not leave the car at all…