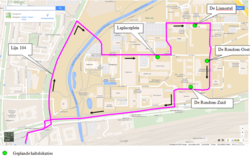 The timetable for Hermes bus 104 will change as of Monday, October 19th.

The first morning and afternoon rush hour services will be cancelled, with extra buses running after rush hour periods. Operator Hermes will decide in November whether to discontinue the line.

A pilot service since February, the 104 connects Eindhoven’s central station with the TU/e campus. The bus currently takes a different route due to roadworks on the John F. Kennedylaan and will return to its normal route on October 12th, with the new timetable coming into effect a week later.

As the line serves those going to and from campus, TU/e financed the pilot. If the service is continued, Hermes will also expect a financial contribution from the university. Important investments are also expected from other campus dwellers such as Fontys, DIFFER energy institute, GE Healthcare, and Brainport Development.