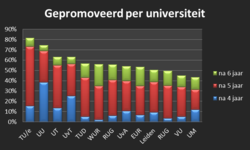 PhD candidates at TU/e are the fastest when it comes to completing their PhD research, figures provided by VSNU show.

The average Eindhoven PhD candidate completes their PhD track in 54 months, where four years should be the standard. Over seventy percent has their PhD degree after five years. Eindhoven tops the list here, too.

Looking at the other universities of technology, Twente follows in the wake of TU/e with their PhDs spending an average of 55 months on their research. Becoming a doctor in Delft takes considerably longer (62 months).

The percentage of PhD candidates who have their degree after five years is nowhere near that of Eindhoven: it’s 55 percent in Twente, and only 43 in Delft. Generally, PhD tracks in technology and economy are completed faster than those of other scientific areas.