Silk Route Comedy at the Hub 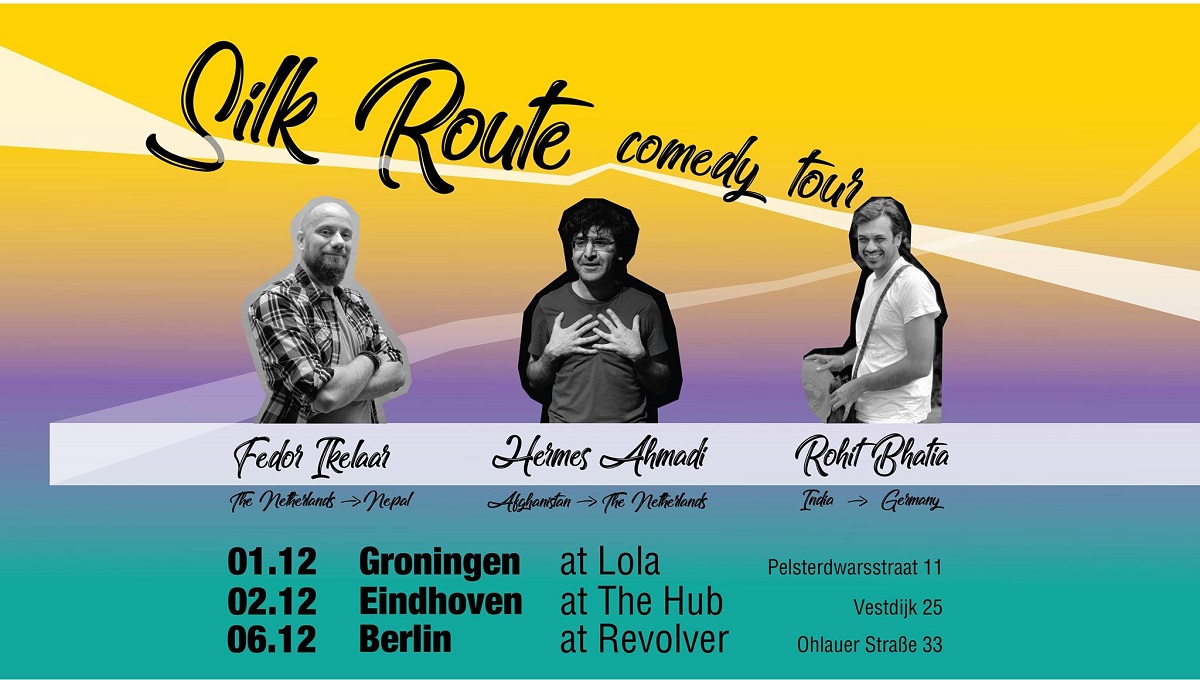 Eindhoven’s international hot-spot, The Hub, opens its doors on a Monday to give your week a laughing start! Three stand up comedians will bring their comedy tour to this all-embracing venue. Tracing their influences and experiences from the ancient SILK ROUTE in the Himalayas, they will trade their tales from places far and beyond to spread joy, enlightenment and laughter. The wisdom and follies of these wanderers is a treat for those who like to laugh hard.

Presale: €7,50 (6,50 for students)
At the door: €9 (€8 for students)
Tickets are available through:
https://www.tix4all.nl/ticketshop/silkroutecomedy

FEATURING:
Hermes Ahmadi is an Afghan refugee, who lives and works in the Netherlands. Hermes honed his skills with the microphone while studying sociology. A very sought-after act in the Netherlands, Hermes’s energetic and powerful delivery has made him a favorite on the festival-circuit. His success has further motivated him to take up comedy as a profession.

Hermes also regularly performs in Dutch. No matter where or in what language Hermes decides to be funny in, he always delivers a performance that leaves them laughing. Hermes states that his aim is to use comedy to make his life, “something slightly more enjoyable.”

Fedor Ikelaar always felt a bit out of place in his native country Netherlands. So, a few years ago he left home to live in Nepal, where he feels even more out of place. Nowadays, he is one of the biggest English language comedians in Nepal, as he is quite tall. A full-time touring comedian, Fedor regales audiences all over the world with stories of being surrounded by spiritual Nepalese, opium dealers and forgotten hippies. He mostly fits himself one of the aforementioned categories except at international airports ~ where he goes back to holding on to his Dutch passport.

Fedor founded Top of the World Comedy, and recently organized Nepal’s first international comedy festival. As a co-founder of the Nepal-based comedy collective, Comedy Tuk Tuk, he tries to help up-and-coming local talent by staring down at them.
http://fedorcomedy.com/

Rohit Bhatia was born and brought up in Bombay, India. He worked a daily news reporter, wrote a regular humor column in a music magazine, rode over the Himalayas on a motorbike, and played in a punk rock band, before moving to Berlin, and becoming a professional comedian.

Rohit’s first international solo show was in Sweden where he performed to a packed out theater. He has brought laughter to several cities in Germany, the Netherlands, India, Vietnam and Finland. He has been featured internationally on BBC Radio and in The Guardian. Rohit hosts houseful comedy shows in Berlin, notably Revolver Comedy. He also performs in German, and is currently the only Indian comedian to do so.

Tackling topics such race-relations, cultural appropriation, foreign policy, immigration, and religious persecution in correlation with waking up too early, Rohit Bhatia’s comedy “stimulates the mind and relaxes the body.” He regularly writes, tours, and fills forms to live in Europe.
https://www.thebhatia.com

For Eindhoven News by Prathyusha Adiraju

22 June 2022
A film based on drawings by primary school pupils in the city was shown in the Eindhoven Muziekgebouw. The animation film was musically supported...