Home CORONA The Coronavirus outbreak – how bad is it really?

The coronavirus has now hit the Netherlands. But we are not alone. According to the World Health Organisation (WHO), as of yesterday (27 February), 20 other countries in the European region have reported cases of this new CO-VID19.

Is there a real reason to panic? Or is this variant of the coronavirus just another flu strain? It is important to remember that the coronavirus is not a single illness. It is, in fact, a large family of viruses. It causes illness ranging from the common cold to more severe diseases such as SARS. This CO-VID19 that is currently causing all this uproar is a novel coronavirus – a new strain that has not been previously identified in humans.

According to an article on a health research website, medRxiv, of 45 000 patients who have contracted this disease, about 81% did not get more ill than if they had a common cold. About 14% of the people affected had to be hospitalized, and of these, 5% had to be ventilated. Since this is such a new disease, these percentages have ample scope. Most of the patients were also in China, where this virus first broke out.

The latest WHO situation report indicated that the death rate for this CO-VID19 is 2,3%. However, of the almost 83 000 cases reported globally so far, only 3 664 are outside of China. Of those infected, 57 have died. That brings the mortality rate down to 1,5%.

More than 700 cases have now been reported in Europe. The most, by far – 647 – are in Italy. And of the people known to have been infected in Europe, there have been 19 deaths, 17 of these in Italy.

In comparison, according to a Dutch media outlet, seasonal flu kills 0,1% of people who get ill. But, SARS, which swept across China, in particular, in 2003, had a death rate of 9,6%. SARS affected 26 countries, and more than 8,000 cases were reported. Far fewer than the current CO-VID19 outbreak, but also far deadlier.

Who is most at risk?

According to the WHO and the same paper published on medRxiv, very few children became ill. Most cases (22%) were of people in their fifties. Then 20% of people aged 60 to 80 are at risk. Less than 1% of people under 50 are at risk of dying from this disease. And according to the research, those with underlying conditions such as coronary disease or diabetes are more at risk.

The outbreak, of which the first case was reported in China less than two months ago, was declared a Public Health Emergency of International Concern on 30 January. And it has reached our shores. So, what can you do to prevent infection? The WHO has laid out some guidelines. Most of these are things you would do to avoid getting seasonal flu. The most important thing is to stay informed and aware. 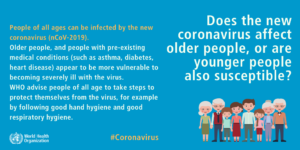 Since this is a virus, antibiotics are not the first course of action. According to the WHO website, “antibiotics do not work against viruses, only bacteria. The new coronavirus (2019-nCoV) is a virus and, therefore, antibiotics should not be used as a means of prevention or treatment. However, if you are hospitalized for the 2019-nCoV, you may receive antibiotics because bacterial co-infection is possible.”

Sources: medRxiv and the WHO