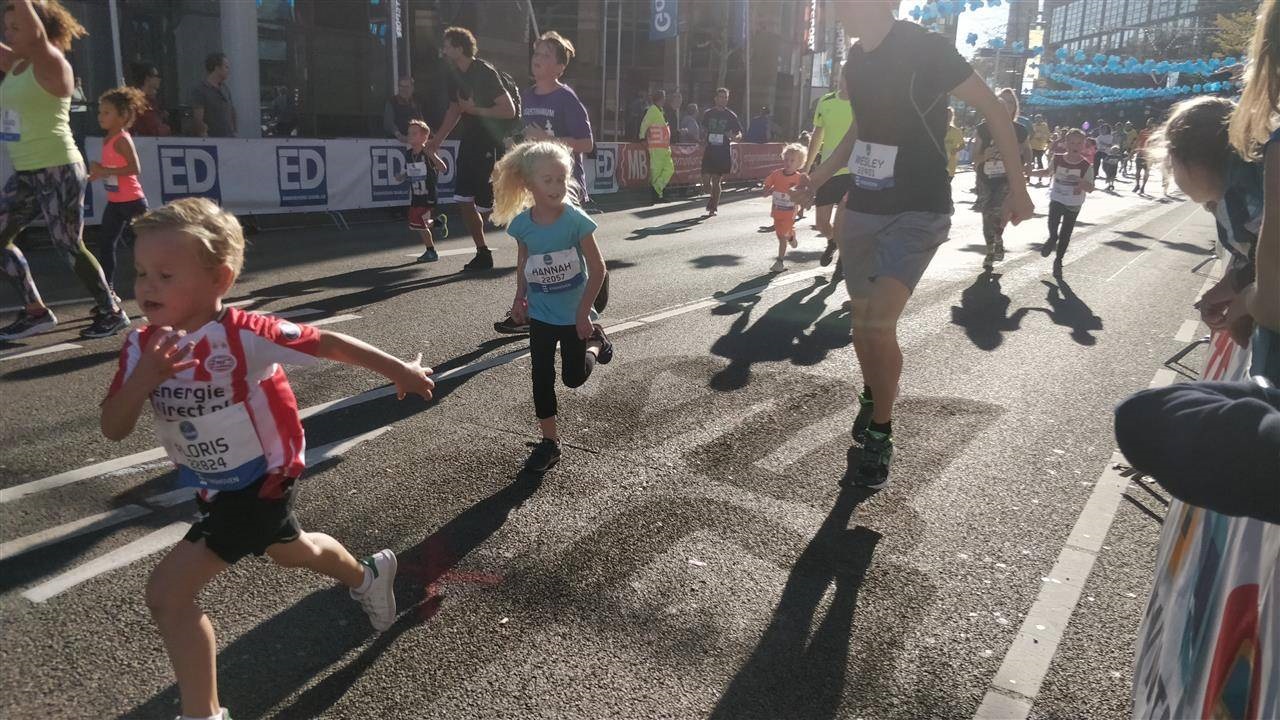 This weekend, the Eindhoven Marathon event not only welcomed top athletes. Young runners completed a mini-marathon. Amateur-runners compared the event to Carnival.

Mini-marathon: running with mom and dad

Most of the young participants had prepared well. These included pupils of primary school “De Boog”. For weeks, they had run around the school to train for this annual running event.

Looking tanned, wearing special school-shirts and participation numbers, pupils appeared at the mini-marathon start. Five-year-old David Bosch was among them. He was ready “for the real marathon”, as he called it. Like others, he had trained for weeks.

Alderman Stijn Steenbakkers (Sports) and the special children’s mayor fired the starting pistol. A mini-marathon is the length of an English mile; roughly 1.6 kilometers. The children and their supervisors ran along the Hermanus Boexstraat and finished at the Vestdijk.

Of course, family members lined the route to encourage participants. The sun also helped. A few of the young participants ran like fanatics. Others took their time, as surroundings impressed.

Nevertheless: everybody who finished received a medal. That’s what a mini-marathon is about: encouragement and reward. Participants displayed their medals proudly.

When asked if it was fun, David only nodded. “But I’m pretty tired now. And I’m hungry.” Hardly surprising: running 1.6 kilometers on small legs, is quite a distance.

Meanwhile, grown-up runners remarked, Eindhoven’s marathon is the nicest one of the Netherlands. One participant said: “It’s like Carnival!”

Top athletes spurted ahead of amateur participants; or had even already finished. It did not matter. For  amateur runners, this event is all about trying to achieve personal records, or just complete the distance.

This year, there were about 23.500 participants. They ran various distances. Many wanted to complete the route in a personal record.. Encouraged by family and friends and random Eindhoven residents, they ran the route.

“It’s one big party,” another runner stated, “people are encouraging me from each side, great!

Along the route, beer flew abundantly. The Eindhoven Marathon proves again, it not only attracts top athletes and amateur runners. It combines running with the usual warm, welcoming Brabant-Burgundian conviviality.

Park Hilaria is officially off limits

Geldrop quiz is still on

Violist, pianist to give first ‘concert for 100’

Any good ideas for the CBD?