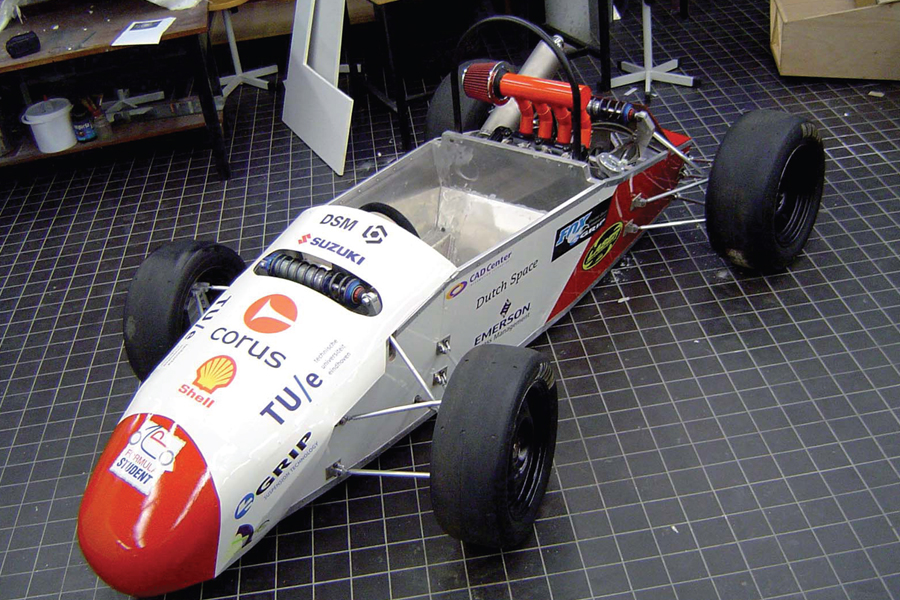 On Friday, 1 June, the ‘Brainport Eindhoven Racing Day’ will be held. It will be hosted by University Racing Eindhoven (URE).

The URE hopes to attract old and young to 18 Septemberplein, in the city centre, on that day. They plan to reveal their latest electric racing car, the URE13 – a combination of speed, engineering, and racing – to the public at large. In this way, the Brainport region will showcase their prowess in the automotive field as well.

The URE13 is considered to be the younger brother of the Formula E race car. It was constructed by a team of Tu/e students in only one year. People are welcome to come and see this new race car and witness a demonstration, from between 18:30 and 19:00.

URE is also 15 years old this year. To celebrate this anniversary, some of their previous cars can be seen in action again.

URE was founded in September 2003 by a group of six Tu/e students. The faculty of Mechanical Engineering wanted students to be better prepared for the industry. In answer, a team was founded to design a racecar to compete in the Formula Student/SAE competition. The team was established under the name Formula Student Racing Team Eindhoven (FSRTE). Their first car (pictured above) was named the FSRTE01.

They were not able to complete the car in time for the event, but a racing team was born. Since then they have built 14 vehicles, including the lastest URE13.

Designs changes over the years

In 2007, when they changed their name to URE, the team had grown to 61 team members. The URE03 finished a German endurance race for the first time. It ended in 13th place.

The year 2010 heralded an important change for the URE car designs. The URE05 was converted into the URE’s first electric race car, the URE05e. This new era brought new challenges, but because of its sound design, the electric car had a great first season. It reached an overall third, second, and first place in the UK, Germany, and Austria respectively.

Since then, URE has adjusted their designs to enable their cars to achieve top performances. The URE08 was lighter than its predecessor by 45 kg. In 2015, the team developed their first four wheel-driven car, the URE10.