Home FEATURES Yours, Mine & Ours: Snert, Erwtensoep & Split Pea Soup 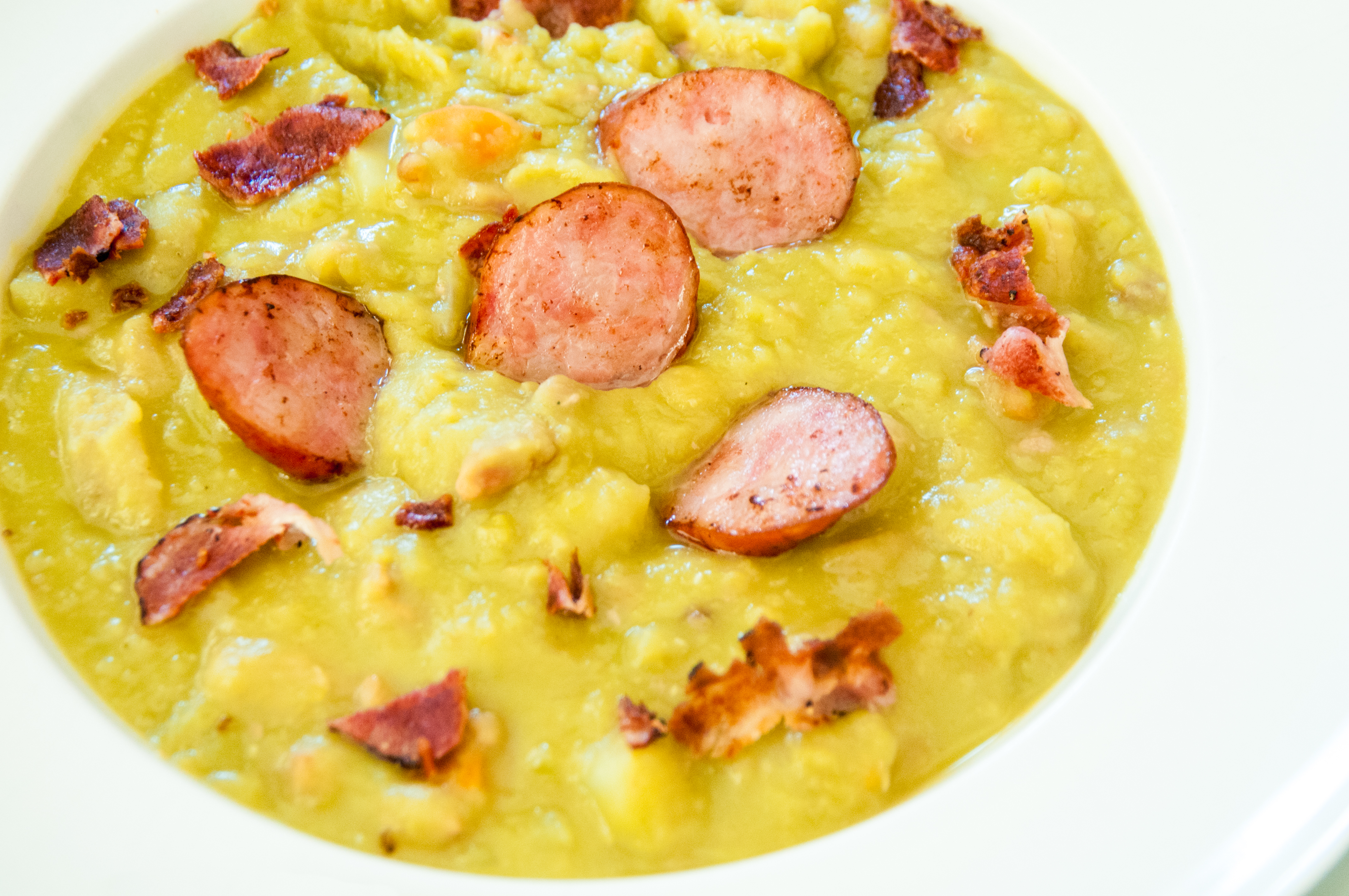 Pease porridge hot, pease porridge cold,
Pease porridge in the pot, nine days old;
Some like it hot, some like it cold,
Some like it in the pot, nine days old.
– Unknown, England, 1765
Split Pea soup, or as the Dutch call it, ‘Erwtensoep,’ or more lovingly (and easier to pronounce for the non-Dutch), ‘Snert,’ is ubiquitously Dutch. With Rookworst, Katenspek and a side of Frisian Rye Bread. It’s unmistakable. And why Snert, you ask? The word snert comes from the word, ‘snerten,’ which means, to cook something very well. And this soup is cooked very well, indeed.
Snert or Split Pea Soup, also belongs to all of us. And I mean that with the greatest love. You or I or your neighbour or mother would never make the ‘same’ snert, and we wouldn’t want to. That makes it our own. Even if the “bones” of the recipe remain intact, the touches, flair and seasonings change from he, to she, to them. I could go so far to say that a soup could cross cultural borders and bring my mishmash of international readers together.
Being as most of us are likely already familiar with pea soup and this is most definitely soup weather, I thought this would be a good place to begin for my first article. A comfort food for some in many cultures and countries, a warm bowl of pea soup may help us feel closer to home when those winter days have us melancholy. In the end, it may also bring some poetic connection between home and Holland. (Stay with me here!)

noun
Collins English Dictionary – Complete & Unabridged 2012 Digital Edition
The long gray days of winter cold, insisting you curl up on the sofa under big blankets with a cup of steaming tea, also calls for warming dishes such as Snert. The simplicity of the soup lets it cook short or long and can be eaten for days if you so choose. It’s rustic but nutritious, which explains its popularity here. Dried split peas are easily kept through the winter, as well as root vegetables and cured, smoked meat. So, in these dreary months when nothing can be grown and before the times of Albert Heijn home delivery, this was, and remains, a staple dish. Even alongside ice rinks, GLOW Festival and in Christmas markets, the large pots of steaming Snert can’t be missed, normally flanked by steel pots of hot chocolate (warme chocolademelk). Snert is considered good-and-done when it is “thick enough to stand a spoon in,” after hours of cooking, and sometimes overnight.
Snert is so strongly regarded by the Dutch as a comfort food that In recent times(1994), it was asked for as a ‘last meal,’ a Dutchman by the name of Johannes van Damme, sentenced to Death in Singapore, for drug smuggling. The proper ingredients were flown in for the affair. He had enough for lunch and for the night he was hanged. “Last meals,” are historically that of something bringing comfort to the one headed for the gallows, one last time. As unromantic as this story is, there is truth in it.
We know that Snert or Erwtensoep is famed in the Netherlands, but not only. Pea soup is about as is as international as the pea, which has been cultivated since 500 BC by the Greeks and Romans, and consequently by the pea’s popular existence, also the soup. It has spread far and wide since then. The French have Potage Saint-Germain(made of fresh peas rather than dried and Romaine lettuce), the Canadians traditionally use yellow peas, and the Danish have Gule Ærter(which uses very robust ingredients, like head cheese, beets and mustard, but is also served with rye bread like the Dutch version), the Germans’ version is very similar to the Dutch and the Poles have their militarily associated version, named, Grochówka Wojskowa(with the variation of garlic and herbs). 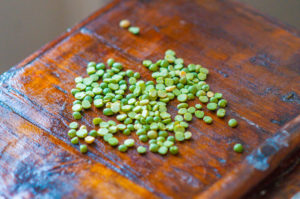 My first experience, as an American, with the hype of split pea soup has to be from almost as far away from the Netherlands as I can imagine. I was visiting California back in 2010 and I passed through Buellton, driving along the 101. Pea Soup Anderson’s, was founded by a Dane and a Frenchwoman (again with the international aspect), in 1924. Honestly, I was a bit confused how an entire restaurant could be dedicated to a mushy green soup, with green chairs, green walls, green tables and terrible lighting (kitsch or fun?) At the end, what made it good was fresh ingredients, keeping it simple and keeping the tradition. It is certainly not a beautiful dish; ugly but delicious – and comforting.

Since I moved to the Netherlands, I’ve had pea soup a number of times, even at fine-dining social events, served as an amuse. Odd, I thought. But I was quickly corrected so as not to offend anyone in my thinking that pea soup might be out of place! It seems so commonplace and gezellig, that in order for one to begin to embrace the Dutch as their neighbours, friends or even family, it would be wise to have some basic knowledge about Erwtensoep (Snert). Or else your confused face will may tell quite a story when it is served to you at a party.
In a Dutch cookbook (Boecxken van Cokerijen) from 1514, says that the recipe for Erwtensoep was based with mashed green peas, onions, saffron and cumin, and tied with bread crumbs. Possibly raisins could be added (in those days, salty/sweet was all the rage). The tradition is long running here and perhaps the more antique recipe could be used for inspiration for now as well.
It is important to note that the recipe for Erwtensoep (Snert), as any traditional dish, is different from kitchen to kitchen, this is why I say YOU own it. I took a few basic and traditionally founded recipes and adapted them to come up with one that is easily interchangeable. If you feel the need to add thyme – add thyme. If you like cream, then by all means make it creamy. And I’m not sure if I know any Italian who wouldn’t think of adding a parmigiano rind to this. If you’re from Poland, keep adding garlic and a stack of herbs.
Recipes are often oversimplified, in my humble opinion. This one is simple, but thorough. I add a little salt at the beginning because it helps to break down the membranes of the pea and allow the peas to become hydrated more easily. Later on, you’ll see, the katenspek is first fried and then most other subsequent ingredients are then sauteed in the same pan. Sauteeing the vegetables before they’re put into the soup imparts more flavor through the browning process and the fact that they’re being sauteed in essentially pork fat. Flavor! It also allows for a shorter cooking time. And for your pleasure, the use of one frying pan also reduces the number of dishes you’ll need to wash later on. I only blend half of the peas, but of course, if you like it creamy, blend it all – or not at all if you don’t. If you don’t want to see your vegetables, you can add them at the beginning and blend them with the peas instead. You can make this vegan by forgetting all about the meat and adding more potatoes if you care to.
This is a comfort (gezellig) food, so make it comforting – to you. And like, I said before, although Snert is Dutch, this is your Snert. And if, perhaps, you are feeling melancholy for home, making this Dutch comfort food will help make you feel more at home here.
Cheers!

17 August 2022
The central clients' council and the works council regret the dismissal of the GGzE executive board (RvB) by the supervisory board (RvT). On Sunday it...