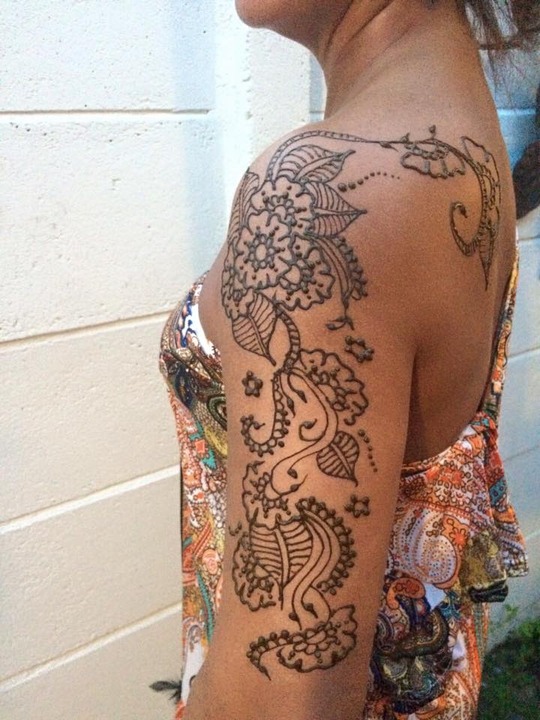 Fadoua is a henna artist, people who would like a decoration of henna on their skin can get one at the International Festival on the twelfth of June 2016.

She is living in the Netherlands but Fadoua is originally coming from Morocco. She shows her passion for life through her henna creations. She uses Jamilah henna, Tazarine henna to make these beautiful paintings of art on the hands and bodies of mostly girls and women. She is one of the few henna artists in Europe who uses ‘syringes’, which is a traditional way of application in Morocco.

Henna is a plant, native to the Mediterranean regions, whose leaves have been used as a hair conditioner and hair dye since the 7th millennium BC. When traveling to Morocco henna can be found in Morocco’s souks and markets.

Some view henna only as a bodily adornment or an alternative to a permanent tattoo, but in Morocco, the role of henna transcends that of beauty. In harmony with the Berber’s belief in Baraka (good luck), henna worn on the body offers protection against illness, the evil eye, and brings joy.
The best known tradition where henna is present is the "henna ritual" at weddings. The night before her wedding ceremony, the bride and her negaffa (wedding planner) and the female family members of the bride gather together to share the secrets of marriage and preparing her for her first marital relations. This is a rite of passage and the bride is adorned with henna; it marks her metamorphosis from a young girl to a wife.