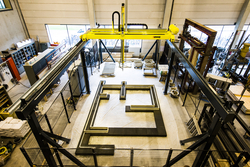 Since this summer the Pieter van Musschenbroek Laboratory at the Built Environment in TU Eindhoven has housed a special contraption: a gigantic printer which can produce concrete structures twelve meters long, five meters wide and four meters high.

During the latest Dutch Design Week this concrete printer, which is unique for the Netherlands, already received a great deal of attention, among others during the NOS eight-o’clock news. Now that peace has returned, ‘concrete prof’ Theo Salet and his team face the real challenge: how can they get the most out of the concrete printer?

In theory, the potential is endless: one push on the button makes the concrete printer spit out preprogramed walls with exotic curves, or walls built up from the inside to the outside of layers of acoustic, insulating, super strong and dirt-resistant concrete.

So far, they have been working with a kind of concrete that needs thirty minutes to set, whereby the printer occasionally took a break to allow the deposited structure to gain strength. That is a time-consuming and hence far from ideal solution.