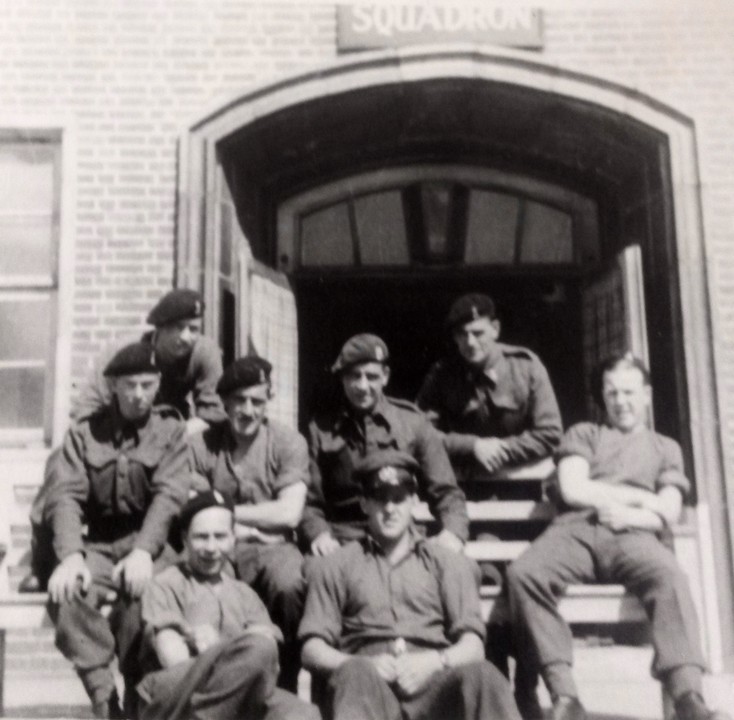 Last year we were contacted by Dorothy Ramser, daughter of Sgt M. I. Dickson. We published the true story she wrote about the experiences of her dad, one of the three British Gunners during the ‘Battle for Veghel’, also known as ‘Operation Market Garden’.

In the year following, she was researching her Uncle Fred’s regiment 23rd Hussars RAC. While doing so she got to know a 92-year-old veteran called Will F. Gray who served in the same Squadron in the regiment as her Uncle. Will wrote a story of a true event that happened to him and the regiment, just outside of Eindhoven.

"Bale Out!" Those two small words have a chilling meaning to any member of a tank crew. It reminded Bill of the day he was driving his Sherman tank along the main road leading out of Eindhoven in the Netherlands. The weather was bloody awful, the rain was hissing down, I was closed down and was driving by periscope.

Owing to the rain I was unable manoeuvre my tank around a blazing and exploding tank. The occupants of this unfortunately were all dead. To get a clear understanding of what action I should take I opened the lid of my compartment and stood up to get a clearer picture. To pass this tank I had to get off the road and make use of open land. However with the incessant rain it was impossible to make headway and those that tried were soon bogged down. I began nudging the stricken tank out of the way to enable me to pass.

The regiment had been ordered to make its way to Arnhem where many of the Allied Airborne Regiments were fighting a hard battle that was supposed to end the war before Christmas 1944. My Regiment was one of the tank regiments chosen to pursue the enemy in order that they could break through the strangle held by the Boche. Our opposition consisted of ground troops and it was believed that the opposition had an 88 mm somewhere. Owing to regular bombardments the German crew must have moved further back.

My Colonel was a little firebrand, he was a resolute man and stood about 5’6" in height. He had been ordered by the General to make more headway in order to assist the Airborne Regiments who were having a tough time.
The weather was awful, the fields were sodden and none of the tanks were able to deploy other than from the main road. Being the leading tank I was in dire straits. The crew was aware of our predicament so there was a feeling of dread amongst us, so out came the cigarettes.
My co-driver Little Joe was a brewery employee. He wasn’t very big and he had just recently returned to Regiment after a short period in hospital because of burns.
My Commander was an ex cavalry Sergeant. He was what we called an old plodder. He was an excellent wireless operator and had been expecting to be chosen for Officer Training. His Brother was a Major in the Indian Army. God help the poor buggers who would have come under his command.
Our gunner was a Londoner and was employed as a telegram deliverer. He told me that he was glad to get away from the job as he was known as the ‘doom and gloom deliverer’.
We were all in the same boat and it was touch and go whether we would come out of this alive.

In the picture Will F. Gray sitting in the centre wearing a peaked hat.
Dorothy’s Uncle Fred Cook is sitting on the extreme left at the front.
Both are tank drivers.

Tomorrow the second part of the story written by W. F. Gray