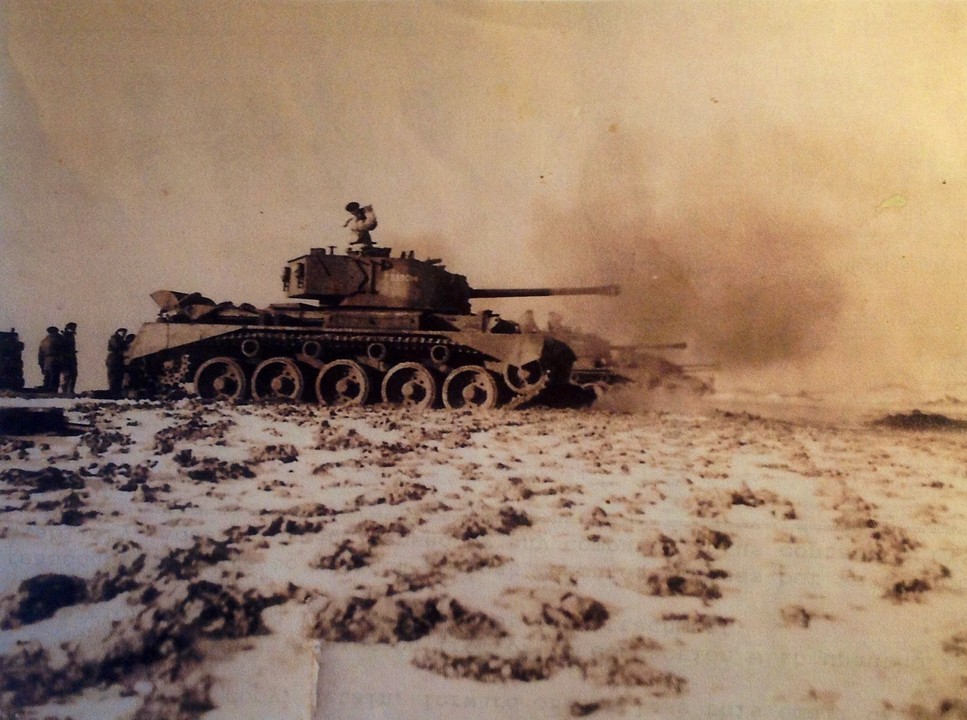 Last year we were contacted by Dorothy Ramser, daughter of Sgt M. I. Dickson. We published the true story she wrote about the experiences of her dad, one of the three British gunners during the Battle for Veghel, also known as ‘Operation Market Garden’.

In the year following, she was researching her Uncle Fred’s regiment, 23rd Hussars RAC. While doing so she got to know a 92-year-old veteran called Will F. Gray who served in the same Squadron in the regiment as her Uncle. Will wrote a story of a true event that happened to him and the regiment just outside of Eindhoven.

I was still driving and stood up and at times firing my revolver at the fleeing Germans who were probably as frightened as we were. "Push on, push on." I heard the Colonel telling the Squadron Leader. The Sergeant called him "Blood and Guts." Guts." I knew the position we were in and I had no intention of having my blood. Guts I had plenty of and we were on the main road heading towards Arnhem where there was no escape. Still if it wasn’t us it would have been someone else. else.

I was the most experienced in the art of tank warfare. I might have been a little keen but had survived many months in battle wearing a suit of armour in the shape of a Sherman Tank all the way from the D-Day landings. Having survived two bale-outs from this type of tanks that were so vulnerable I actually gave it the name of Ronson, ‘one strike and it lights’. Although being keen and at times openly very scared, I was always ultra-careful and generally because of those experiences. I was the first to spot anything that might be dangerous and would take the necessary action to save fellow crew members.

Rain, rain and some more poured out of the heavens. We had been on the go since the early hours of the morning and to be honest nerves were on edge because we were on a tight rope sort of road and two of the tanks had already been knocked out previous, taking over as leading tank. I didn’t smoke but I grabbed one from Joe who had just lit a cigarette. The Sergeant had his binoculars to his eyes and was complaining bitterly that they were useless because of the rain. Now if the Commander could not see, what chance had l peering through the periscope? Once again I opened the overhead hatch cover and stood up. From then with a more limited view I began to realize how near we were to the enemy infantry that were lurking in the fields. I was amazed to see them at either side of my tank. In fact they were so near I was nearly able to hit them over the head with my revolver.
The other three tanks of the troop were following behind and they were shooting off with their machine guns. I knew they had very little to worry about because all they had to do was to follow in my tracks and pray to God that it was not their turn to take over as leading tank. Even my Commander was glad that his tank was on the road and the fleeing Germans could do no harm to him and his crew. After all, they were only poor bloody infantry and were running like hell to try to stop being run over or shot down by the follow up tanks. In fact there were times when they used my tank to prevent each of them being shot.

So believing that everything was now plain sailing, the troop Officer ordered my Commander to push on. It was probable that the Squadron Leader had received a kick in the arse by the colonel to speed up, his orders had been passed down the line.

I was a little wary of the order because we were now approaching a cross road. Being a straight road and having no room for avoidance, I was certain that there had to be an anti- tank gun or a tank somewhere around.

Tomorrow the third part of the story written by W. F. Gray.

In the picture: Will Gray is on the top of the tank – they are testing the guns of their new Comet tanks January 1945.