Home NEWS VVD, CDA and SP will continue in Brabant 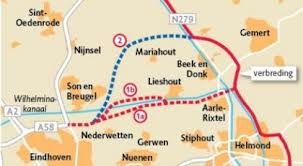 It looks like the VVD, CDA and SP will form the Provincial Executive together in Brabant, which is similar to the situation earlier.

This would be the advice of the person charged with forming a new government (named the ‘informateur’ in Dutch).

What this outcome will mean with regard to the construction of the ‘square’ (road) around Eindhoven, is still unclear. The VVD (liberals) and CDA (Christian democrats) are in favour, but the SP (socialist party) is a fierce opponent. This party calls the construction of the new road through the Dommel valley ‘a breaking point’. In the next few days the parties will negotiate to reach a coalition agreement.

Incidentally Ruud van Heugten will not be there. The CDA deputy has indicated he does not want to continue in politics. In the past Van Heugten promoted the construction of the "Ruit om Eindhoven" in the provincial executive.

The CDA, VVD and SP have a very small majority of 28 seats in the Provincial State assembly. Actually, the ‘informateur’ said it would be preferable for the D66 to join the college. That would be the most representative of the election according to him. But the other three parties are not agreeable it appears.