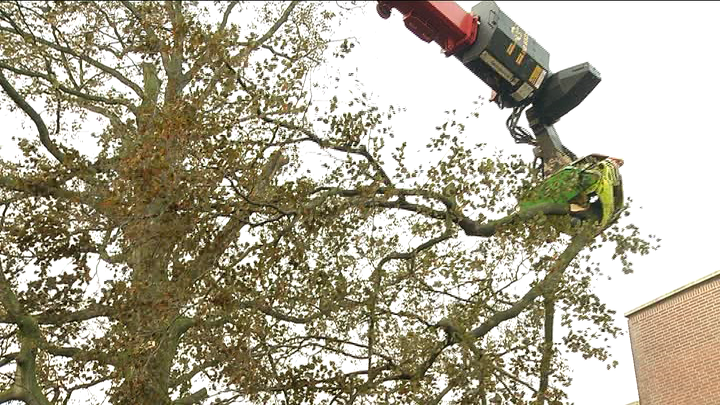 Apparently, the TU/e (Technical University of Eindhoven) is cutting down trees illegally, in order to create a new parking area. This according to Trefpunt Groen (‘meeting place green’ – an organization in Eindhoven which takes care of the green areas in and around the city). The organization prevented a municipality permit from being granted to the TU/e for cutting down trees last year. However, it seems that the TU/e still went ahead and removed approximately 200 trees.

‘A few trees have not been removed yet, but they were so badly damaged, that within a number of years they will die and will have to be removed’. This information comes from Joop van Hout, Chairman of the Trefpunt Groen Organization. ‘We have prevented a municipality permit from being granted, last year. Unfortunately, I still believe that they are trying to get rid of the trees’.

Van Hout is disappointed because the cooperation with the TU/e seemed to be successful for a while. ‘We managed to put together a mobility scheme, whereby the university took care of a substantial decrease in traffic in the campus area, which should have resulted in a decrease in the necessity of extra parking spots’.

Furthermore, two additional Hermes bus stops were added in the campus area. ‘Their actions are contradictory to their own policy. They try to appear environmental-friendly, while in their own backyard, they are busy with illegally applying asphalt to a nature reserve area.’

The TU/e has not yet reacted to those allegations.